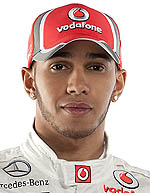 Lewis Hamilton: "I'm massively proud of my team. We've been working incredibly hard throughout the winter: we've never given up, and everyone has just kept pushing and pushing. We've had some tough years, but everyone in this team wants to succeed: to be the best. I'm proud that I was able to do the job for them today.

"My first lap in Q3 felt pretty special - at the end of it, I felt it'd be surprising if anyone could push ahead of that. I tried even harder on my final run, but braked a little too late into the first corner and spoiled the lap. After that, I was just hoping that nobody would go any quicker.

"I just love qualifying, especially when you get the lap just right; when it all flows, the tyres work and you hit the sweet-spot everywhere. It's like heaven.

"Today we showed that we not only have the most beautiful car in Formula 1, but also the fastest! Of course, there's still a long way to go tomorrow - looking after the tyres will be key - but we're in the best possible position to have a strong race."

Jenson Button: "Lewis nailed a great lap in Q3, but I think the whole team is really happy to have both cars on the front row - it's been a long time coming to have the two of us there together. You always want to be first, but I couldn't quite do that today. Nevertheless, I think we both want to thank the team - it's a big vindication of how far we've come this winter.

"And that's been crucial: having a good winter can really make the difference. We still don't know exactly how strong our car will be in the race, but yesterday it appeared to be consistent and looked after the tyres during the stint. Tomorrow will be about getting the tyres to the right working temperature and looking after them across the stint.

"Tomorrow is the important day, and today is about making life easier for tomorrow. Still, this has been a great day for everyone in the team."

Martin Whitmarsh, Team Principal: "It feels very good to be back at the front of the grid, not only bagging pole position but also P2, to tie up the entire front row for Vodafone McLaren Mercedes.

"Both our drivers have driven really well all weekend, and this afternoon they were fantastic. Lewis's pole lap - the 148th in McLaren's Formula 1 history - was a brilliant combination of commitment and control.

"It wasn't easy though, for either Lewis or Jenson. Traffic was a challenge in Q1, and in Q2 and Q3 it was a question of working hard to get the best out of the tyres.

"We think we'll have a good race car; we know we'll have two great race drivers; so, although we never under-estimate our competition, and although we're sure tomorrow's race will be as demanding as it will be entertaining, I guess you could say that we fancy our chances."