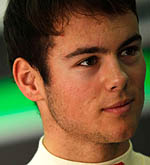 18-year-old Blomqvist has made outstanding progress since graduating from karting in 2009. In 2010 he became the youngest driver ever to win the Formula Renault UK Championship, a feat which earned him the British Racing Drivers' Club's Henry Surtees Award for the most outstanding performance by a young racer. Two recent Formula One World Champions, including Lewis Hamilton, also achieved early success in Formula Renault.

Carrying that race-winning form to the Formula 3 Cup for 2011, Blomqvist was short-listed for the highly prized McLaren Autosport BRDC Award.

As part of the McLaren Driver Development Programme, Blomqvist will benefit from a wealth of personalised guidance in the off-track skills demanded by his craft, as well as building on his racing performances as he climbs the motorsport ladder.

"I'm thrilled to get this opportunity with Vodafone McLaren Mercedes," said Blomqvist. "The competition gets fiercer every time you step up a category, and having this level of support will really improve my strength and confidence."

"Tom is rightly considered to be a very bright prospect in single-seater racing," added Martin Whitmarsh, "as demonstrated by his presence in the shortlist of finalists for the 2011 McLaren Autosport BRDC Award, the ultimate accolade for young drivers and a programme which McLaren has had the pleasure of supporting for more than two decades. Tom is also now a member of the McLaren Young Driver Programme.

"On-track results are the ultimate measurements of a driver's merit, and in this regard Tom is already delivering on his potential. As a winner of the Formula Renault Championship, he's following in the footsteps of Lewis Hamilton, who passed this career milestone just three years before graduating to Formula 1 with Vodafone McLaren Mercedes. We're therefore watching Tom's progress with great interest."