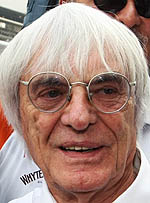 On the first anniversary of the pro-democracy protests in Bahrain, Bernie Ecclestone insists that the Grand Prix will go ahead.

On the streets the anniversary was marked by clashes between protestors, the majority of whom are from the Shia community, and the security forces comprising the police and army.

Much of Manama was in lock-down as the security forces tried to prevent protestors gathering at the now-demolished Pearl Roundabout, the focus of last year's unrest.

There were further clashes in villages around the kingdom, youths with stones and petrol bombs clashing with members of the security forces armed with teargas and rubber bullets.

Earlier in the day, just days after seven Lords and an MP wrote to the Times, expressing their unease at plans for Formula One to return to Bahrain this year, MPs Conor Burns (Conservative) and Thomas Docherty (Labour), Chair and Vice-Chair of the All Party Group on Bahrain, wrote to the newspaper claiming that cancelling the Grand Prix would be a serious set-back at a time the Gulf state is seeking "genuine reform".

"We note with concern calls on these pages to cancel the planned Grand Prix to be held in Bahrain.

"Bahrain has been conveniently lumped together with other nations and labelled part of the "Arab Spring". Yet the response of the government of Bahrain has been notably different. Bahrain invited independent human rights lawyers, the Bahrain Independent Commission of Inquiry (BICI), to investigate and has started to implement its recommendations. In addition to elections that have led to a four-fold increase in women elected to parliament, Bahrain has also asked John Timoney, the former New York police chief, and John Yates, the former Assistant Commissioner of the Metropolitan Police, to overhaul policing, Sir Daniel Bethlehem, the FCO's former principal legal adviser, to review judicial processes, and opened detention facilities for inspection by the Red Crescent.

"Those who want Bahrain to continue on the path of genuine reform will do the cause no service by cancelling the Grand Prix this year. Indeed, surely the presence of thousands of Western visitors and journalists in the run-up to and during the event will act as an additional incentive to the authorities in Bahrain to show the international community its sincerity in the cause of reform and that their support for Bahrain is well placed?"

Going ahead with the event is exactly what Bernie Ecclestone intends to do, though, no doubt, for different reasons. Having said that last year's troubles would "blow away", he described today's events as the work of "kids".

"The only message I got was that there were some kids in trouble with the police," he told the Telegraph. "We are planning to go. I've always said that if there was going to be any drama it would be on the Day of Rage," he added, though protestors have always said that the so-called Day of Rage would take place on the day the Grand Prix is held.

"People there seem confident that a race two months away will be alright," he continued. "The teams are not the slightest bit concerned. They seem happy that things will go ahead without problems. Last year was a more clear-cut decision not to go but things have changed a lot since then."