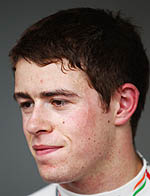 Paul di Resta has hit out at Nick Heidfeld for the German's failure to apologise following their clash in Germany last week.

The first lap incident saw Heidfeld crash into the back of the Scot's Force India, which subsequently spun and lost a number of positions. The German was subsequently handed a drive-through for the incident, but didn't serve it because he too was later taken out by Sebastien Buemi. To add to di Resta's frustration, teammate Adrian Sutil went on to finish sixth, the team's best result of the season.

"It's a frustrating end to my weekend because I had a great chance to score some points today," said the Scot after the race. "I made a reasonable start, maintained my position and I was racing with Michael (Schumacher) into the first corner. Then I got hit from behind, which must have been Nick, and that spun me around and compromised my race."

"I was squeezed at the start and sandwiched in the second corner," said Heidfeld after the race. "Heading into the third corner Paul di Resta was on the outside. I locked up my front wheels and tried to avoid him but just slid into him as there was nowhere to go."

Speaking to reporters in Hungary today, di Resta, said he was surprised not to have received an apology. "He's not apologised, he's not spoken to me, and it was pretty blatant."

However, the German was unrepentant. "Why should I go and apologise? It was just a racing incident. Life goes on," he replied.

There is already history between the two, who clashed in Canada when the Scot attempted to pass the German who rigorously defended his position. Other than having to stop for a new front wing, insult was added to injury when di Resta was handed a drive-through.

"The thing in Canada never cost him anything," said the Scot today, "and then he ran into the back of me and took me out of the race in Germany," Di Resta added. I lost more out of it than he did. He was the one that committed the crime."

Asked whether he apologises when he is in the wrong the Scot replied: "You've got to, haven't you? You've got to go up and say that. It's only right you do it, but whether they accept it or not is another thing. But you at least make the effort."

"It was a racing incident," insisted Heidfeld. "I'm OK with them penalising me, and so there is no special reason why I've not said anything to him."