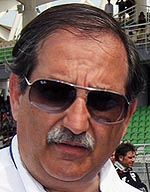 Hispania Racing is to make a donation to the victims of the earthquake in Lorca by supporting a team made up of players from Murcia in their friendly match against Real Madrid on Wednesday at the Nueva Condomina stadium.

"As I said last week, Murcia is a very special place for me," said Jose Ramon Carabante, "and, given the relationship between the team and this city, we have decided to put our part in and will be at the game tomorrow.

"I urge all fans to fill up the stadium, not because of the quality of the game, which of course will be a fantastic spectacle, but because of how important it is for everyone to chip in, every little bit counts towards those who have lost a relative or their house."

All money raised by the match, which will be televised on Spanish national television, will go to the victims of the earthquake.