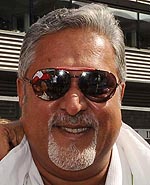 The first race of the 2010 season in Bahrain was a good one for Force India, Adrian Sutil qualified in the top 10 and Tonio Liuzzi finished ninth. The Italian was thus in the points, beaten only by the cars from the 'big four' teams. However, the German's race was spoiled by a first corner tangle with Robert Kubica, a result of the smokescreen produced by Mark Webber. After that he put in a charging recovery drive, and set second fastest lap.

Team owner Dr Vijay Mallya shares his thoughts on the first race of the year.

Overall Bahrain was a good first weekend, with a car in the top 10 in both qualifying and the race. How do you view it?
I'm obviously very pleased, despite what happened to Adrian at the start. For this team, given our history and background, to score points in the first race is quite a remarkable effort. But I think even more so two things have made a very significant impression on me. First is our race pace. I think that's a huge statement for a relatively small team like us. The second is there's been so much spoken about Tonio. He's not just proved himself, but I think he drove beautifully. He preserved his tyres well, he was quick, and he brought the car home in the points. So all credit goes to Tonio.

Adrian obviously had a problem at the start, but he drove very well after that.
Adrian was unlucky. Nevertheless, he did an outstanding job in qualifying, and of course in the previous practice sessions he was always very quick, always very confident. Having dropped down to 21st place to work his way up to 12th position was a great achievement. He also made the soft tyres last for longer than we would otherwise have expected and he also clocked the second fastest lap time, behind Alonso. I think overall I have every reason to be pleased about the team's performance. And we have another update coming for Melbourne.

Were you especially pleased to get a car into Q3 at the first race?
You've got to be amongst the top 10 to score points to begin with. With the big four - McLaren, Ferrari, Mercedes and Red Bull - for me to say that we will run ahead of them sounds ambitious. But to be knocking on their doors and ahead of the rest is something I can be very pleased about.

Generally, you are happy that the upward progress has continued?
The way we are today I think we're very competitive, and everything is going to plan. In 2009 I said we should score some points occasionally, and we scored 13, which was respectable. This year I said we should score points regularly. We have opened our account in the first race and I think the opportunity is wide open for us to now score points regularly. I wouldn't be surprised if we could target the odd podium or two. And next year we should hopefully strongly target podium finishes.

Obviously this was the first race with the new no refuelling rules. How do you think it panned out?
It's hard to tell from one race and everybody was faced with a guessing game. We didn't know how long the tyres would last in the race, and there was no data to really base any proper judgement on. We need to give the regulations a chance to prove themselves and for people to learn how to use them. To change everything after just one race is a knee-jerk reaction, let's see how it goes in Australia and Malaysia and make an informed decision about whether we do need to react to improve the Formula 1 show. If we do then at least we have more information to make a proper call.