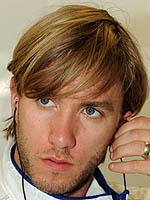 Ahead of today's free practice session, the air temperature is 12 degrees, while the track temperature is 20 degrees. It is chilly but the sun is shining.

Much of yesterday's opening session was run in the wet, while the second session took place in bright sunshine but somewhat cool conditions.

Despite Brawn's claim that the afternoon session was positive and much was learned, the fact that the cars finished seventeenth and eighteenth leads many to believe that the cool conditions mean Button and Barrichello will continue to struggle for grip.

Red Bull finished fourth and tenth, with Webber and Vettel insisting that though there is work to be done things are moving in the right direction.

Hamilton and Kovalainen both looked confident in their (long wheelbase) McLarens, as did Raikkonen (Ferrari) and the Toyota duo. The biggest disappointment was Williams, with Rosberg admitting it was "not a good day".

When the lights go green, it is Fisichella who leads the way, followed by Badoer, Buemi, Rosberg, Heidfeld and a whole host of others. Indeed, only Kovalainen, Raikkonen and Barrichello are not on track.

As the drivers return to their garages, their installation laps completed, Raikkonen heads down the pitlane, followed, shortly afterwards, by Barrichello.

Ten minutes into the session, Fisichella is the first driver out for a second run. As the Italian begins his first flying lap, teammate Sutil heads down the pitlane, followed by Alguersuari.

Hamilton improves with a 46.803 as Raikkonen goes fourth (48.005). Elsewhere, Button and Barrichello are on track.

Still no sign of the softer tyre yet as Alguersuari goes fourth with a 47.178. Moments later, the Spaniard is demoted when Glock goes second (46.962). Next time around, the Renault driver goes quickest in the second sector, crossing the line at 47.052 to re-take fourth.

Hamilton is told that, like yesterday, he is doing well in the first and final sectors but losing time in the second. On the other hand the Red Bull are strong in the second sector.

Vettel is finally out on track, however, teammate Webber shows no sign of going out. The Australian is probably saving his engine.

Raikkonen goes cross-country kicking up a great cloud of grass and mud. Meanwhile, Trulli goes second, ahead of Buemi, Glock and Sutil. Raikkonen heads back to the pits.

As Vettel goes thirteenth (47.418), Webber climbs into his car. Elsewhere, Fisichella has to have a new wing fitted after colliding with an "animal".

Kovalainen moves up to third with a 46.813, as Vettel heads back to the pits, Red Bull keeping a very close watch on its engines.

A 46.500 sees Hamilton go quickest as Sutil goes third, as Alguersuari is one of the first to run on the soft option tyre.

Sutil (medium) goes quickest with a 46.109, the German no doubt running on a very light fuel load. Next time around the Force India driver consolidates his position with a 45.677 as Webber complains of a "loss of power". Still no time for the Australian.

Button is back on track, the world championship still down in sixteenth, five place behind his Brawn teammate.

Glock goes second with a 46.233 as Alguersuari goes quickest in the second sector. A poor final sector sees the Toro Rosso driver fail to improve on eighth.