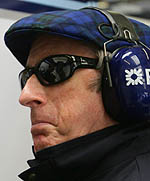 In the face of widespread criticism, and even claims of a government investigation, Jackie Stewart has announced that he will waive his 2009 fee from the beleaguered Royal Bank of Scotland in his role as an 'Ambassador' for the bank.

In recent weeks the Scot has been widely criticised after it was revealed that he refused to renegotiate his £4m a year contract with the bank at a time when it has just lost £28bn and is looking to axe 30,000 jobs. Speaking at the time, the three-time World Champion said: "I am sorry these people are losing their jobs but I signed a contract and I have done my bit."

Yesterday, however, RBS announced that Stewart, who avoids paying UK taxes by living in Switzerland, "in recognition of changed financial and economic circumstances", has offered to fulfil his contractual obligations in 2009 without payment.

Stewart, a boyhood hero of Sir Fred Goodwin, the disgraced banker who led RBS to the biggest loss in British corporate history, has already worked for the bank for five years, while his current contract ends in 2011. Under the terms of the new deal, Stewart will waive his 2009 fee but will be paid £4m a year in 2010 and 2011, effectively a three for the price of two deal.

On Saturday, The Times claimed that on the orders of RBS Chairman, Sir Philip Hampton, and with the support of Chancellor Alistair Darling, City law firm Linklaters is to investigate "Fred Goodwin's ten-year stint in charge of RBS - including his lavish spending on sports stars".

The newspaper spoke to Stewart on Friday night, when the Scot defended his contract: "I have a large number of global activities such as product launches and corporate hospitality," he said. "It was a five-year contract, I think, and then it was extended. My contract finishes with the bank in 2011."

Less than 24-hours later, RBS announced that Stewart had agreed to surrender a third of his fee due for the remainder of his contract - the three for the price of two deal.

The article also shed light on the fact that in addition to his £4m a year, RBS also pays Stewart's travel expenses between his homes in Britain, Switzerland and the various Grands Prix he attends.

"Some years I go to five races, some years ten, it depends," he said. "They pay my expenses wherever I travel, which is sometimes commercial long-haul and sometimes in a private plane with other RBS people. If RBS already have a plane going somewhere, then I travel with them."

The bank also pays for Stewart to be taken by chauffeur-driven car and helicopter between the track and his hotel.

Following Stewart's u-turn, attention will now turn to Goodwin, who, at 50-years-of-age, has pocketed a £703,000 a year pension.