Toro Rosso accelerates on and off track 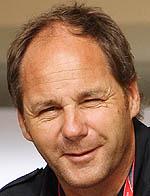 Gerhard Berger must be a very happy man at the moment. True, there's a credit crunch and Red Bull, his partner in Toro Rosso, is selling its stake in the team, but at the current rate Berger will have a huge return on his hands.

Hot on the heels of the team's first race win at the Italian Grand Prix, Pitpass' business reporters Chris Sylt and Caroline Reid write in the Evening Standard newspaper that in 2007 Toro Rosso made its first net profit in over 10 years.

According to Sylt and Reid's F1 industry report Formula Money, Red Bull invested £30m in Toro Rosso in 2007, which undoubtedly had a big part to play in the team's revenues rising from £43.5m in 2006 to £75m last year. However, it managed to make a £400,000 after-tax profit and given that in recent years both McLaren and Renault made losses on almost double this revenue Toro Rosso's performance is quite a feat.

This should attract the attention of potential purchasers since, provided that at least the same amount of investment can be maintained, it shows that the business can make money. Perhaps more eye-catching is the fact that Toro Rosso is one of few F1 teams to have no loans and no long term debt. This means that a purchaser could buy it with a bank loan secured on its future income safe in the knowledge that the team wouldn't be too weighed down with debt.

To make it even more attractive, there has been heavy investment in the team over the past year. The value of its fixed assets nearly doubled to £6m, it halved its creditors to £9.6m and its headcount accelerated 18% to 143. It may need much more money poured in if it needs to make its own chassis in future but the rules on customer cars have yet to be written.

The question is who will buy Red Bull's stake in the team? Red Bull put it up for sale earlier this year and, as yet, there has been little word of buyers. Rumours have linked the Ferrari-engined team to a buy-out by Fiat-owned Lancia. Likewise, Volkswagen, which already has a partnership with Toro Rosso, has been mooted as a buyer but perhaps there is another manufacturer out there eyeing it up. Given the team's recent performance on and off track, if we were Red Bull boss Dietrich Mateschitz, we'd change our mind.