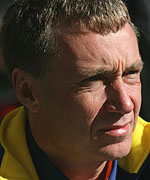 Bob, it has been three weeks since the Bahrain Grand Prix. What has been the agenda for the team over that period?
Bob Bell, Chassis Technical Director: Our main focus was to prepare for the Barcelona test last week, which was very important for us as we have quite a major aerodynamic upgrade and some new mechanical components for the R28. The purpose of the test was to verify that they were all fit for purpose and then to pick the best parts for the Spanish Grand Prix because some of those upgrades are circuit dependent.

What areas have the team focussed on in the quest to improve performance?
BB: We now have quite a clear picture of where we are underperforming. One of those areas is our aerodynamic performance because at the moment we are deficient in aero-generated grip in the high-speed corners. That's where we are making the biggest push because that area is probably contributing the most to our lack of performance. Equally, we are losing out in the low-speed corners where the performance of the car is dominated by mechanical grip, and so we have suspension upgrades that will start addressing those problems. We are also a bit down on engine performance and we can recognise a straight-line performance deficit compared with other teams. However, in the world of frozen engines there is not much we can do about that.

Will this progress be reflected by an improvement in on-track performance?
BB: We are reasonably confident that the things we are putting on the car will produce a clear and definable performance advantage. I think we will also see some more unquantifiable benefits with improvements to the driveability and feel of the car because if we give the drivers more confidence, particularly under braking, they can extract more performance from the car. So we can be reasonably confident that it will be a big step forward and that it will be multiple tenths of a second. We do have to be cautious, though, and remember that every team sees Barcelona as an opportunity to introduce a major upgrade – we just have to make sure that we take a bigger step than the other teams.

Let's talk about the drivers. How is Fernando's state of mind ahead of his home Grand Prix?
BB: Fernando remains very focussed and positive. I think he's also suffering a degree of disappointment because he doesn't have a car capable of fighting for the podium, although he recognises that the team is doing all it can to provide a better package. So I think he will approach Barcelona with mixed feelings because although he will enjoy massive support at his home race, this is certainly a race where he would like a car that is capable of fighting for the win. However, the one thing we know about Fernando is that he will fight tooth and nail until the chequered flag, whether he's fighting for first place or fifteenth place – he never gives up.

Nelson had a difficult debut, but has come on strongly. How do you view his introduction to Formula 1?
BB: It has been a difficult introduction for Nelson, in much the same way as it was for Heikki last year, and there is a lot of expectation on young drivers nowadays. Winter testing was difficult and we did have concerns as to whether Nelson would be fully ready for the season. But he was, and at the final winter test he showed his true performance which impressed us all. Melbourne was certainly a difficult debut, but in the last two races he has really shown his capabilities and I think he has done an excellent job for the team. We've been impressed and to some extent pleasantly surprised, and we expect him to get stronger and stronger throughout the season.

What can we expect from the team this weekend?
BB: During winter testing we did not look too bad in Barcelona and if this trend continues, combined with the upgrades we have to the car, then we should take a step forward. Barcelona is very much a circuit that separates the wheat from the chaff in terms of aerodynamic performance and we do recognise that we are deficient there in comparison to the front runners, but I still feel we can do a good job.