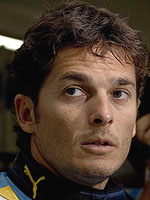 The conspiracy theorists, among others, have been warning that we should all be keeping a watching eye on Felipe Massa during next weekend's all-important Brazilian Grand Prix, claiming that the youngster could accidentally take out Fernando Alonso and thereby hand the championship to his Ferrari teammate.

However, those of you who watched Sunday's excellent MotoGP Portuguese Grand Prix, where Dani Pedrosa took out Honda teammate, and championship leader, Nicky Hayden, in an ill-timed move on the fifth lap, thereby handing the championship lead to Valentino Rossi, for the first time this year, may now appreciate that the man to watch next weekend could be Renault's Giancarlo Fisichella.