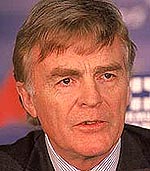 Why are the FIA and some of the car manufacturers in Formula One arguing about engines?
Max Mosley: "The FIA wants the manufacturers to stop developing the existing engines and to use engines at the level reached by 1 June 2006, at least until the 2011 season. Unfortunately four of them want to continue development and are trying to get everyone else to do the same."

Why do you want them to stop?
MM: "There are several reasons. First, the engines are already much more powerful than originally predicted by the engine suppliers. As a result the cars are faster than we expected and the drivers are expressing worries about cornering speeds. Secondly, if we stop trying to make the existing engines go a few hundred rpm faster each year (which is a sterile and pointless exercise, entirely irrelevant to the real world), the car manufacturers can allow some very talented Formula One people to work on energy recovery, storage and re-use as well as on fuel-efficient engines. Both areas are now fundamental to mainstream automotive research. Thirdly, current expenditure of €100 to €200 million ($125-$250 million) per manufacturer on developing Formula One engines which are irrelevant to road cars, is clearly unsustainable, particularly for manufacturers who are unsuccessful in Formula One."

Why do some of the manufacturers disagree?
MM: "They want to continue development and have put forward a proposal which reduces the scope for improving the existing engines (the so-called Monaco Agreement), but nevertheless allows significant development work to continue."

Why do they want to do this?
MM: "Probably because they have a lot of people working on engine development and don't want the inconvenience of downsizing their workforce or moving people onto other work. Also, some of the less experienced managers in Formula One believe they can gain an advantage if they have more time. They forget that the teams in front of them will not stand still."

Isn't the "Monaco Agreement" a reasonable compromise?
MM: "Not really, because even this restricted programme would cost each manufacturer upwards of €30 million ($38 million) a year. Not all manufacturers want to waste money in this way. Also, the independent teams know that part of these extra costs will be passed on to them and they, too, do not want to spend money needlessly."

The €30 million plus per year you say the "Monaco Agreement" would cost each manufacturer represents a big saving compared to current expenditure. Surely you can compromise on this?
MM: "First, for safety reasons we don't want the concomitant annual increase in power. Secondly, more than €30 million ($38 million) is a great deal of money if it is not in your budget. But let's look at another aspect. If the four dissident manufacturers put the annual €30 million ($38 million) or more they each want to spend on their current engines, into a common fund to promote Formula One, they could afford to race twice a year in the USA and buy enough advertising on US television to ensure coast-to-coast live coverage of every Grand Prix and still have money to spare. Is it not time to start looking at a slightly bigger picture?"

But surely research and development of engines, including current Formula One engines, is fundamental to the manufacturers, part of their DNA?
MM: "No, that's an old-fashioned view. Nowadays, the core research effort at all the major car manufacturers is on saving energy and using energy more efficiently. This is their DNA - at least if they are to survive. Making an engine run faster than 19000 rpm is pointless. Much better to have a Formula One programme based on energy re-use and fuel efficiency. A bonus for Formula One would be that stored and re-used energy would help overtaking and improve the racing."

So what happens now?
MM: "The 2008 regulations stop all engine development from 2008 to 2011. This is what everyone signed up to when they entered last March. We cannot impose different, much more expensive, rules on teams which have already entered unless, of course, all the teams agree. We have repeatedly said that we will look very favourably at any proposal which has the support of all the entered teams. We were promised a unanimous proposal some weeks ago, but it has not appeared."

And the longer term?
MM: "The 2009 rules for energy recovery, storage and re-use are now under active discussion with interested teams. For 2011, we have invited the car manufacturers to make proposals for a proper racing engine but with power limited by fuel efficiency rather than simple, old-fashioned engine capacity. The principle would be: the more power you can get from your fuel, for example from a given flow-rate of (perhaps bio) fuel, the more competitive you will be. At present it is a question of how much power you can get from a fixed engine capacity - as said, a wholly pointless exercise."