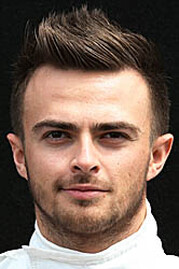 It was his success in the Asia-Pacific Championship that saw him make the move to single-seaters in late 2008 contesting the Formula Junior FR2.0 Portugal Winter Series and Formula Renault UK with Michelin Winter Series.

2012 saw Will move up to Formula Renault 3.5 Series with Carlin, finishing a disappointing 12th overall.

He remained in the series for 2013, now with P1 Motorsports, scoring five podium results on his way to finishing fourth overall.

2013, also saw Will's F1 debut, the youngster contesting the Young Driver Test at Silverstone with Caterham, completing 98 laps on his way to posting the thirteenth best time of the day.

Again in 2014 he contested the Formula Renault 3.5 Series, with P1 by Strakka Racing, scoring two wins and four podium finishes on his way to finishing sixth overall.

At the beginning of October, having tested for Caterham again at Silverstone, Will was appointed official reserve driver at Marussia alongside Alexander Rossi, joining the weekend of the ill-fated Japanese Grand Prix.

Stating that Will would contest a number of FP1 sessions over the course of the remainder of the season, it was subsequently revealed that it had been intended to run him in FP1 at Suzuka but the team was unable to return the relevant paperwork to the FIA Contract Recognition Board in time.

A month later, with Marussia and Caterham both in Administration, a crowd funding project saw the Leafield outfit raise enough money to contest the season finale in Abu Dhabi. Will was called up to replace Marcus Ericsson who had left the team.

Whilst on paper Will is shown as having qualified last and finished the race last, that doesn't begin to tell the story. Thrown in at the deep end, with a team with no resources and in total crisis mode, the youngster did a remarkable job and, in our humble opinion, deserves another chance.

In one famous moment, either unaware who he was racing or refusing to be intimidated, Will battled with Fernando Alonso who was running behind the Caterham following a pit stop. As the Briton refused to yield, Alonso cried out over the radio: "Who is this guy?"

As Will pondered what 2015 had to offer, Marussia was on the verge of staging a remarkable recovery. Virtually dead and buried at the end of 2014, by mid-January there were still signs of life.

On 19 February, the team took a major step towards rebirth by entering a CVA with its creditors, thereby allowing control of the team to be taken out of the hands of the administrators and placed in the hands of the company's directors, who were named as Graeme Lowdon, John Booth and former Sainsbury chief executive Justin King, previously tipped (by some) to replace Bernie Ecclestone as F1 boss.

On 25 February, the team named Will as one of its drivers and said that it would line-up on the grid for the season opener. A stance confirmed on 4 March. "The team has been preparing the cars with which it will begin the 2015 season and which comply fully with the 2015 regulations," it said. "Later in the season it will introduce a new 2015 specification car as per the designs initiated last year."

No, the team was never realistically in with a chance of points. No, that 2015 car never did appear. No, it wasn't even able to match the disastrous McLaren... but yes, it was there on the grid, having survived where HRT and Caterham had failed.

Missing the season opener due to the lack of time in which to organise things, Will's 2015 season didn't really start until China, the Briton not making it to the grid in Malaysia.

Though he regularly out-shone teammate Roberto Merhi, especially in qualifying, when Alexander Rossi made his debut late season, albeit for just 5 races, it was clear the American had the edge.

It would be unfair to compare Will and the 2014 Manor to Fernando Alonso and Mark Webber at Minardi, but the fact is the Briton never really appeared close to doing anything special, not once suggesting that he might have the 'extra something'.

That said, clearly caught off-guard by Rossi, Stevens appeared to raise his game in the final coupler of races, though whether this will be enough to retain his seat in 2016 remains to be seen. However, this being the lean end of the grid, money is sure to play a part and there are drivers out there with much-needed funding.