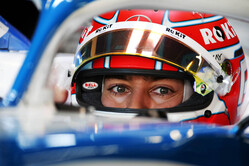 After a brief period when the F1 rumour mill went into overdrive, Mercedes passed on the opportunity to make George Russell the newest member of their roster.

The Williams driver had shown great promise while filling in for Lewis Hamilton at the end of last season but, for now, he remains with his current team.

With Lewis Hamilton eventually agreeing to a one year contract for 2021, there are no changes as far as Mercedes are concerned but, technical director Mike Elliott has confirmed that Russell has not been completely overlooked.

Mercedes must have been tempted to make George Russell's switch a permanent one following his performance at the 2020 Sakhir Grand Prix. Standing in for Lewis Hamilton, the youngster, on loan from Williams, qualified in second place behind new teammate Valtteri Bottas. After challenging at times during the race, Russell finished down the field in ninth position although he did enjoy the consolation of returning the fastest lap.

For now, it's all about immediate results as far as Mercedes are concerned. They are looking for Lewis Hamilton to extend his run of world titles while maintaining their own grip on the award for top manufacturer.

With the new Formula One season just weeks away, UK bookmakers attached to sbo.net are showing few surprises as far as the betting markets are concerned. Mercedes are red hot favourites to reclaim their constructors' championship crown at the end of the campaign while Lewis Hamilton is highly fancied to retain his drivers' title.

In recent years, we've seen the odds shorten as the season has got underway. Sbo.net will reflect the changing market and they will provide news and opinion pieces as the campaign develops. With links to offers and promotions included, this is a useful site to visit for anyone interested in staking on motorsport.

For now, George Russell must focus on his season with Williams and look to put more championship points on the board. It must, however, be difficult to ignore those links with Mercedes and the comments from the company's technical director have brought the situation into sharper focus.

In an interview with the Muscle Help Foundation, Mike Elliott suggested that most people at Mercedes would be following Russell's season extremely closely.

The report, which was repeated by the Daily Express newspaper amongst others, goes on to showcase a number of drivers that Elliott felt could make a breakthrough in 2021. The new Aston Martin team were also put under the spotlight but it was clear that the main subject of the article was George Russell.

Does Hamilton hold the key?

Three into two won't go and, with Valtteri Bottas and Lewis Hamilton combining to keep Mercedes at the top, George Russell must be patient. The contribution of Bottas cannot be overstated and, in another era, the Finn may well have secured a number of World Drivers' Championships himself.

At the age of 31, Bottas may yet get the chance to lift the ultimate prize but what of his teammate Lewis Hamilton? The short term nature of his current contract came as something of a surprise to the wider racing community. Mercedes claimed that talks had been left late and the one year deal was signed with a view to revisiting things at a later stage.

Cynics have, however, suggested that Hamilton may retire from the sport if he secures a record breaking eighth title at the end of the 2021 campaign. The feeling among many is, therefore, that Lewis Hamilton may be the man to make way if George Russell is to get that Mercedes seat.

With certain rule changes set to come in from the start of the 2022 season, Mercedes' dominance of the sport may be facing its biggest threat. The plans may help to create a more 'open playing field' and to dispense with the type of procession that the German manufacturer has provided in recent years.

It's just another factor to put into the mix when it comes to assessing the make up of the Mercedes team moving forward. For now, it's the classic 1-2 of Hamilton and Bottas but latest reports suggest that George Russell remains firmly on the radar.