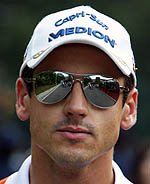 With his 2013 line-up yet to be confirmed, Force India boss Vijay Mallya hasn't ruled out a return for Adrian Sutil who spent four seasons with the Silverstone-based outfit.

Referring to his current line up of Nico Hulkenberg and Paul di Resta, ranked by many as two of the hottest rising talents on the grid, Mallya admitted that neither has yet committed to next season, though he would be keen to retain them.

"I offered an extension to both drivers," he told Reuters. "I hear from the media that Nico has signed with Sauber. Well, if he has then good luck to him. I have not been officially notified by Nico of anything He hasn't sat down with me and told me that. I would expect that he would if he was on his way... I have an excellent relationship with him, he's a wonderful guy. He's done well for us."

Asked if Sutil, who has attended a number of races this season as he seeks a way back into F1 following the nightclub fracas that threatened to end his career and possibly see him jailed, Mallya replied: "Yes absolutely, why not? Never forget I always have the potential of considering Sutil again. Sutil is always quick. So there are many options. I would certainly consider him.

"Even though I didn't re-sign him for 2012, he's still welcome," he continued. "That's the kind of culture I'd like to have in this team. Very friendly, very informal. So Nico will always be part of us. I won't stand in his way."

As rumours regarding the future of a number of teams waft through the paddock, Mallya, whose business interests have been making their own headlines recently, including the grounding of his Kingfisher airline, admitted that he too is looking for investment.

"It's very clear to us that we need some serious investment decisions," he said. "We have the capital, part of the $100 million deal I did with Sahara for the infusion of funds into the company for improvement basically. Now we've got to take a decision on how we are going to spend it because if I now want to start challenging Lotus and Mercedes and go up into the top five, we need some better tools and better equipment."