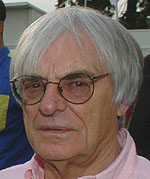 If you think that F1's boss Bernie Ecclestone is a one trick pony then think again. His west London football team Queens Park Rangers is on the verge of being promoted to the Premiership and as Pitpass' business editor Chris Sylt exclusively reveals, he is set to make £100m from it. The team is up for sale and given the expected elevation in its status there shouldn't be a shortage of takers. However, as with most things connected to Ecclestone, it isn't as simple as that.

Ecclestone has a 62% stake in QPR after buying the shares owned by former Renault F1 boss Flavio Briatore in December last year. Last month it was reported that a group of American and Asian businessmen want to buy out Ecclestone and sources suggest that Force India F1 team owner Vijay Mallya is in the running. QPR said in a statement that it "has entered into preliminary discussions, which may or may not result in an offer being made." However, as Sylt reveals in the Daily Mail, Ecclestone says that Briatore still holds the keys to a sale.

"I don't have any choice staying in or going out," says Ecclestone adding "Flavio would probably be the one to sell if anybody." Ecclestone explains that when he bought out Briatore the Italian got an option to take back the stake if he were to sell so it has to be offered to him.

Ecclestone believes buyers aren't driven by their wallets and he says "I don't think people buy football teams at the beginning with the idea of making money. They buy football teams because they are interested in football and they hope somewhere down the line everything is going to be good."

It was unclear from the club's statement whose shares may be sold but Ecclestone confirms that the other QPR co-owner, Indian steel magnate Lakshmi Mittal, "is not a seller."

QPR has denied that the sale discussions have anything to do with a Football Association investigation into the club's chairman Gianni Paladini who allegedly submitted false information in documents relating to the renegotiation of star player Alejandro Faurlin's contract last October. Faurlin was QPR's highest-profile signing of 2009 in a deal said to be worth £3.5 million. It is a far cry from football's most expensive players and Ecclestone says he objects to their blockbuster salaries.

"When you see someone, which is what happened with Manchester City, prepared to pay £50 million for a footballer who before the ink is dry on the cheque could have broken his leg, not even playing but falling down the stairs, it just doesn't sound right to me."

QPR was last in the Premier League in 1996 but its improved performance has not come thanks to a cash injection from its wealthy owners.

The team made an £18.8 million after-tax loss in 2008-09 when it finished 11th in the division and then lost another £13.7 million last year when it finished 13th. Ecclestone says "you see a lot of these clubs today that are nowhere as high in the league as we are playing people that have fallen from the top and beating them so there is no need to spend these fortunes." It is the same frugal strategy which has made him an estimated £2.4 billion from F1 and football will now be adding to this tally.