The pulse pounding thrill ride of formula 1 racing is cherished by many. A sport that combines elegance, finery, and alacrity with speed, danger, and cutting-edge technology has a way of fitting right in with innovation and inspiration. Formula 1 prints are able to bring the raw power and thrill of the track into any room, according to the bestselling company Sport Photo Gallery, who sell not only formula 1 prints but all kind of sports images.

With the popularity and pristine aesthetic stimulus of formula 1 cars and their drivers, photography has raced to offer the finest moments that fans the world over can enjoy. Luckily, the beauty and expertise translate perfectly into prints, so if you're looking to give your space a powerhouse boost- formula 1 is the thrill ride you're looking for.

In a record-breaking race, the Great Britain Grand Prix of 2019 saw Lewis Hamilton winning the race for a record sixth time. He also smashed the previously standing lap record time by 27.369 seconds. Leaving the fans and other entrants at Silverstone gobsmacked. Well, sort of... in stark contrast to last season, Hamilton came into the race hungry, leaving everyone to play catch up. By lap four, Hamilton and team mate Bottas went head to head, in an epic scrapping for first spot with Bottas holding on top.

On lap 20, Giovianzzi took to the gravel, requiring the full safety car, which Hamilton took full advantage of, hitting the pits and securing a lead.

A commanding and epic win secured by Brazilian driver, Ayrton Senna. Driving a McLaren-Honda, started out in pole position and never left it. Setting the fastest race lap and secured his second Monaco win.

The race was anything but normal. Starting off with an overly delayed red to green light sequence at the start of the race, drivers were clearly agitated, resulting in an accident on an early corner between Alain Prost and Gerhard Berger. The accident resulted in a stopped race that seemed to smooth over the troubled initial start. While Senna held a comfortable lead throughout, veterans of the circuit seemed to encounter more than their fair share of trouble. Nelson Piquet was disqualified in lap 35 for accepting a push start and Prost retired in lap 30 with battery problems. 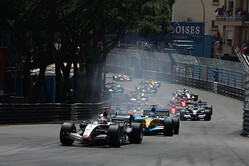 Kimi Raikkonen led from the start in the pole sitting position, but by the 23rd lap, he had controlled the lead. In the 23rd, Christijan Albers spun into the wall, blocking two-thirds of the track and taking out Michael Schumacher. Once the safety car was deployed to clear the blockage, Renault drivers hit the pits, while Raikkonen skipped them under instruction from Neil Martin, McLarens chief strategist.

Seemingly unwise, this edgy move saw Raikkonen a 34.7 second lead by lap 42, when he finally made his own way to the pits. Returning to the track 13 seconds away and blowing away his competitors. 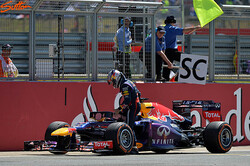 With the world focused on Pirelli and the wear of tires, Tire-gate 2013 was in full swing. Following the criticism, Pirelli announced plans to unveil new designs at the Canadian Grand Prix. Testing out the design on Mercedes car and drivers, Pirelli again came under fire for giving a competitive advantage to Mercedes in Canada and Monaco. Safety became a massive debate in the new manufacturing methods. The struggle continued until Pirelli introduced two new specifications of rear tire in time for the Canadian race and that there would be no further tire changes for the season.

During the British Grand Prix, several drivers suffered explosive tire punctures mid-race. This prompted the racing community to extend Pirelli permission to introduce an entirely new specification of tire in time for the Hungarian Grand Prix.

Despite the issues in rubber, Sebastian Vettel, racing for RedBull, took the championship by winning India with a 115-point gap.

Securing another team win for Mercedes, Hamilton and Bottas took the top two positions. Giving Mercedes it's third 1-2 finish of the season. Which is the first time since 1992 that a team has taken 1-2 in the first three races of a season- Gained by Nigel Mansell and Ricardo Paterson for Williams. Bottas had a rocky start which allowed Hamilton the lead and a massive triple collision on the fourth corner caused two drivers, Lando Norris and Daniil Kvyat, to retire early.

Although finishing in 6th position, Pierre Gasly was able to hammer out the fastest lap of his career and the race.