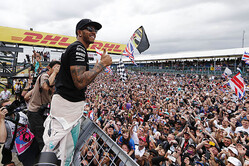 British Grand Prix is one of ten GPs to be shown live in by Channel 4, with highlights of all 21 races.

Channel 4 has confirmed the ten Grands Prix it will broadcast live in 2016, including the British Grand Prix on July 10th.

As part of its new three-year deal from 2016-2018 with Formula One World Championship Limited, Channel 4 will broadcast live coverage of ten Grands Prix, including practice sessions and qualifying over each season. It will broadcast comprehensive highlights of all 21 races, including those broadcast by Sky Sports.

Following a picks process with Sky Sports, the full list of races broadcast live by Channel 4 is:

All of the live coverage and highlights will be broadcast free-to-air and in high definition.

"We are delighted to announce the full line up of races we will be showing live across 2016," said Stephen Lyle, Channel 4 Head of F1. "The British Grand Prix is a huge highlight of the sporting calendar and we're looking forward to covering all the action live from Silverstone this summer."

This follows the news announced earlier in the month that Whisper Films will produce coverage of the 2016 season and that 13 time Grand Prix winner David Coulthard will be part of the Channel 4 F1 coverage team. The full presenting and commentary team will be announced in due course.