Cosworth races £7m into the red 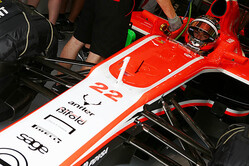 Last weekend was the end of an era for Formula One and it was hard to avoid it. Viewers of the season-ender were reminded almost every few minutes that it marked the last race for Red Bull Racing's Mark Webber and, slightly less frequently, that the current V8 engines will be dropped for a V6 powertrain next year. However, there was another departure which was given far less coverage: the exit of engine manufacturer Cosworth.

In truth, Cosworth's exit has been more of a long goodbye and an article in the Daily Telegraph by Pitpass' business editor Christian Sylt reveals the impact of this. Last year it lost its engine supply deal with Williams leaving it with only two clients in F1 - HRT and Marussia which scored no points. HRT shut its doors at the end of 2012 and next year Marussia is switching to Ferrari which is what has driven Cosworth out of F1.

The loss of F1 work and uncertainty over Cosworth's ownership led to a 24% crash in its revenues to £41.5m in 2012. In turn Cosworth reversed from a £3.9m profit to a £7.1m net loss and breached the terms of its lending agreements. It is a tremendous fall from grace for what was once one of Britain's flagship engineering firms.

The Northamptonshire-based company was founded in 1958 by the engineers Mike Costin and Keith Duckworth. Engines made by Cosworth have powered more Formula One cars to victory (176) than those of any other manufacturer except for Ferrari (222). Its first win came in 1967 with British driver Jim Clark but it is a decade since it last won a race.

In the 1980s it became synonymous with boy-racers as it helped to create their beloved Ford Sierra Cosworth. The company was bought out by Ford in the 1990s and then sold to current owners, the venture capitalists Gerry Forsythe and Kevin Kalkhoven, in 2004.

The duo put Cosworth up for sale in October 2012 after spending more than a year trying to float the company. They instructed investment bank UBS to find a buyer and Cosworth's chief executive Hal Reisiger says that "order intake was impacted as key customers waited to discover the outcome. Subsequently the existing shareholders decided to retain 100% ownership of the group for the foreseeable future."

Cosworth is financed by shareholder loans and a revolving credit facility which doubled to £10m last year. Reisiger says that "following the poor trading performance in 2012, the group breached its covenants under the facility."

As a result, Cosworth had to repay its £612,000 ($1m) overdraft facility, take on a further £9.6m ($15.7m) in shareholder loans and renegotiate the terms with the bank. They were agreed earlier this month and allow Cosworth to repay the £10m over the next five years.

To compensate for its reduced F1 involvement, Cosworth has diversified into the aerospace and medical sectors in recent years and although this could not offset losses in 2012 there may be a smoother road ahead.

As Cosworth had a reduced workload last year it was able to accelerate development of new products. Its research and development expenditure comprised 17.9% of revenue, up from 15.5% in the previous year. Reisiger says that the new products "will come to market progressively in 2013 and beyond." It isn't clear what business sector they will be in but one thing that's for sure is it won't be F1.