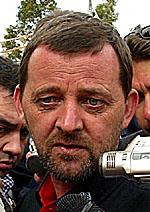 Minardi boss, Paul Stoddart, who also acts as spokesman for the nine rebel teams, has spoken out following yesterday's incident at the Nurburgring, when Kimi Raikkonen crashed out of the European Grand Prix following a suspension failure, which was (in turn) the result of the Finn flat-spotting his tyre earlier in the race, which led to chronic vibration.

"What happened at the Nurburgring on Sunday was completely predictable, given the current, FIA-enforced tyre regulation," the Australian told Pitpass. " Mercifully, it did not result in serious injury or a fatality on this occasion, but how any regulator can argue that the rule change with regard to tyres is in the interests of safety, defies all logic.

"Quite simply, the regulation needs to be changed," he continued. "If it is not changed and there is another, more serious incident, then the whole world will know where to lay the blame - fairly and squarely at the feet of the FIA President.

"To be absolutely clear on this point for the record, nine out of the 10 Formula One teams did not want this regulation. In fact, we implored Max Mosley to move forward with a single control tyre for Formula One. Both he and Ferrari, however, steadfastly refused to do so."