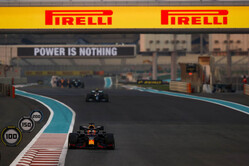 Red Bull driver Max Verstappen claimed his second win of the season and the 10th of his career in the sixth consecutive year that the Abu Dhabi Grand Prix has been won from pole. He followed a one-stop medium-hard strategy; the same strategy used by the Mercedes of Valtteri Bottas and Lewis Hamilton, in second and third behind him, as well as six other drivers.

All three compounds were seen at the start, with the top three getting away on the Yellow medium, some of those behind them on the Red soft, and a few other drivers closer to the back choosing the White hard tyre with the aim to complete a long first stint and gain track position.

Lap 10 produced the pivotal moment in the race, when a safety car prompted the majority of the field to anticipate their stops and switch to the hard tyres, including the leaders. Ferrari was a notable exception, with both drivers staying out, as well as Renault's Daniel Ricciardo, Haas driver Kevin Magnussen and Alfa Romeo's Antonio Giovinazzi.

Ricciardo was the highest-placed finisher to start on the hard tyre (from 11th on the grid) ending up seventh after a 39-lap stint on the white tyre.

The race was generally a one-stopper, with just a pair of two-stoppers: Williams driver Nicholas Latifi and Magnussen. His Haas team mate Pietro Fittipaldi was the sole driver to stop three times.

Mario Isola: "The race strategy was influenced heavily by the safety car, which prompted nearly everyone to anticipate their planned stops in order to lose less time in the pits. This favoured the hard tyre, which was key to the race. As a result, the drivers had to think about managing their tyres towards the race finish, but in the end the hard compound stood up extremely well to the challenge of 45 laps of running. Nonetheless, the teams generally adopted the strategies that we predicted and we saw all three compounds in action at the start. Congratulations to Max Verstappen for a dominant weekend and to Formula 1 above all for staging a fantastic 17-race calendar under extremely difficult circumstances. Now we remain in Abu Dhabi for a one-day Young Driver test on Tuesday, where we will run the 2020 tyres for the final time."