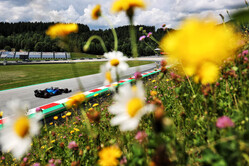 Dave Robson, Head of Vehicle Performance: We have had a good day here at the Red Bull Ring. There was rain in the area this afternoon, but it was difficult to predict if it would hit the circuit. We made some adjustments to our programmes in both practice sessions to give us the best chance of collecting the key data ahead of the race. Although only a few drops fell early in FP2, this approach worked well, and we are happy with our day's work. The car is working reasonably well here as we continue to understand the new parts that we have fitted over the last couple of events.

Nicholas had a spin during FP2 but there was no significant damage to the car, and he was able to complete his session as planned. George did a long performance run on the Soft tyre early in FP2 during the light rain before moving to high fuel to finish the session.

The rest of the weekend will probably be dominated by the weather, with more rain predicted for Saturday and Sunday. Our job now will be to make the most of the conditions no matter what finally comes our way during qualifying and the race.

George Russell: It was enjoyable out there; the car felt good and our high fuel runs are looking really strong, so there are plenty of positives. The conditions were difficult at the start of FP2 with some rain, so I didn't push too hard as it wasn't worth the risk, but I think we've definitely got some more lap time in the pocket. We've been very consistent with our qualifying efforts this season, so I'm hoping for Q2 tomorrow. However, we're also focussing on finding a balance which translates that qualifying performance into race pace, as that's where the points are scored.

Nicholas Latifi: The track limits were a little tricky out there today, and in FP2 I overstepped a little bit and dipped the wheel on the edge of the gravel which caused the car to spin. The car set-up felt good though, which is definitely an improvement from France. In terms of tomorrow, it's a little difficult to say what the expectations are, especially due to the changing conditions, but we'll go away tonight, analyse the data and make sure we're ready for qualifying.