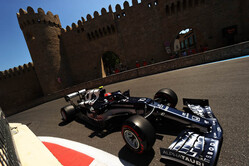 The big question heading into the session is whether Mercedes can sort out its abysmal single-lap pace, for while looking strong on longer runs, the W12 was sadly lacking yesterday.

Though mixing it with the Red Bulls yesterday, Ferrari prefers to play down its chances here, while Pierre Gasly, Fernando Alonso and Antonio Giovinazzi were all ahead of the McLarens... and the Mercedes. Speaking of whom, the German team has reverted to its older rear wing today.

While there was only one red flag yesterday - after Leclerc hit the barriers - there were spins and offs aplenty as drivers struggled for grip.

Furthermore, it is expected that the wind - and not for nothing is Baku known as The City of Winds, which, you may not be aware, is derived from the ancient Persian name for the area, Badkube, which means "pounding winds" - will play a part.

The lights go green and Schumacher leads the way, followed by his Haas teammate.

Leclerc reports that the track is very dirty.

While the Haas pair are on softs, Alonso is on mediums.

The Spaniard can only manage 45.838 which puts him second.

Bottas, Norris, Ricciardo and Perez head out, as does Hamilton. While the Mercedes pair are on mediums, Perez is on hards.

As Tsunoda goes second (44.970), Mazepin runs remarkably close to the barriers but gets away with it.

Verstappen goes off at T4 and has to revert to reverse.

On softs, Giovinazzi goes second (44.784), Alfa Romeo feeling that it can pull off an upset today.

As Gasly goes second (44.541), teammate Tsunoda improves to top the timesheets with a 43.447. The youngster is on softs.

Verstappen goes fifth with a 44.898, as Hamilton complains of "no rear grip".

Sainz also complains that his rear is "all over the place".

Nonetheless, Leclerc goes second and the Spaniard third, both are on mediums.

Hamilton improves to seventh (44.556) as Gasly leapfrogs his AlphaTauri teammate to go top with a 43.187.

Oh dear, Verstappen has repeated Leclerc's error of FP2, and goes into the barrier at T15. That said, unlike the Ferrari driver, Verstappen carried too much speed into the corner as opposed to suffering a lock-up.

Unable to reverse the car, and with his steering clearly damaged, the Dutchman climbs from his car and the session red-flagged. As the marshals push the RBR16B to safety, its driver sit by the side of the track, clearly disappointed with himself.

While this is a blow to Red Bull it does little to help Mercedes cause, both cars still well off the pace.

Those quickest times of the AlphaTauri pair were posted on softs, while Leclerc was on softs and the Bulls on hards.

The session resumes with 25:00 remaining, Vettel leading the queue at the end of the pitlane.

Hamilton, who has a close encounter with Stroll in T16, remains 13th with that 44.556 as Perez heads out on softs. The Mexican had previously complained about a long brake pedal.

A yellow, following an incident at T3 for Latifi, compromises Leclerc as he is about to begin his flying lap.

Having gone quickest in S1, Sainz gets it wrong at T15 but is able to dive into the escape road.

Despite changes to the Mercedes, Bottas reports that it "hasn't made a difference", the dejection in his voice obvious.

"I damaged the car, sorry," admits Mazepin. "I brushed the wall". Twitter erupts.

Replay shows the Russian running too wide in T15 and hitting the barriers with the front and then rear right side of the Haas.

Leclerc goes quickest in S1, but Perez goes quicker. In S2 the Ferrari driver once again is quickest, while the Mexican can only manage a PB. At the line Leclerc posts 42.778, while Perez responds with a 42.595, courtesy of a tow from Alonso.

Moments later, Schumacher takes to the escape road at the same corner.

"No power, no gears," reports Russell, as Vettel makes use of the escape road following a spin at... yes, you've guessed it, Turn 15.

The VSC is deployed as Russell stops on track

The session resumes with just 06:00 remaining.

Indeed, Hamilton is advised that his time was due to a "monster tow", Bottas' 43.745 probably a better indication of the W12's pace here.

"I clipped the wall, at Turn 13," admits Norris, "but everything feels fine."

As the session ends, Bottas gets it wrong and heads off down the escape road at Turn 3.

Over the next two hours, as Mercedes seeks to find some way of improving its pace, Red Bull will be busy repairing Verstappen's car, likewise at Williams, there is the need to discover the cause of Russell's problem.

The lack of track time shouldn't hurt Verstappen too much, while Mercedes best chance appear to rest of its drivers getting another "monster tow".