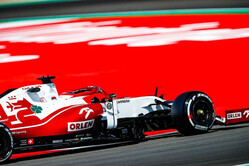 Few circuits hold as few secrets as Barcelona: the habitual venue of winter testing and a circuit that featured in the calendar, albeit with a few layout changes, since 1991, it is probably the most familiar venue for anyone who has ever driven a Formula One car in anger.

Still, practice is important to fine tune the cars' set-up to respond to this year's tyres, vehicles and the reprofiled turns 10 and 11, so today we set off to tick off all boxes in our to-do list. Robert Kubica took over Kimi Raikkonen's car for the morning session, doing a fine job until a spin brought his day to a premature end, while the Finn returned to the cockpit alongside Antonio Giovinazzi for the afternoon. The day produced a good return of laps and the demonstration, as if any was needed after three rounds of racing, that the midfield fight will once again be tight.

In such a competitive scenario, extracting every ounce of performance from the car will be crucial and that's exactly what we will set out to do tonight, when our engineers will crunch the data the drivers produced. More of the same - not an unusual thing to be confronted with when here in Barcelona...

Kimi Raikkonen: "I was able to do a good number of laps in the afternoon, which is always positive. I know the track really well and there is effectively only one new corner to learn. The car didn't feel too bad so we can be optimistic ahead of the rest of the weekend. We have work to do tonight, but so does everyone and we will see tomorrow where we end up in qualifying."

Antonio Giovinazzi: "All in all, it was a positive day in which we showed to be really close to the top ten. We need to find something more while looking at the data tonight, but we know qualifying will be decided by the smallest of margins. The track layout has improved, I like the new turn ten: I think it's much better than the previous configuration. It remains a difficult corner and one that can make the difference on the single lap."

Robert Kubica: "It was nice to be back in the car in an official session and I'm sorry about finishing the session like this. It was a very small mistake but we paid a high price: I misjudged the grip levels on my first run on soft tyres, spun mid-corner and got stuck in the gravel trap. It still was good to get back the feeling with this car, especially ahead of next week's test: I am looking forward to trying the new 18-inch tyres and helping the team in making this important step. It will be an interesting session!"