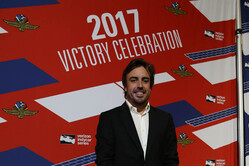 It is debatable whether Honda and McLaren's smoke and mirrors bid has worked or not. For while Fernando Alonso's Indy 500 exploits have boosted interest in the event, and IndyCar, certainly among F1 fans, the bottom line is that the Spaniard's 'day job' has not got any easier while he was away.

Indeed, as Alonso was robbed of a possible win at Indianapolis by a Honda engine failure, the Japanese manufacturer was revealing that at present its MGU-H's are incapable of lasting more than two races... which means lots more grid penalties for Fernando and Stoffel.

However, the Spaniard, who did F1 proud on Sunday, returns to the sport not only $305k richer but also with the 'rookie of the year' award.

The award, which is voted on by the media, is based on a number of factors; the driver's skill, sportsmanship, accessibility and conduct during the month, and finishing position.

While the Spaniard rightly scored well in the first three categories, some in the media have said that Ed Jones, who finished the race third, should have picked up the award.

On a day the processional Monaco Grand Prix was put firmly in the shade, the thrills and spills of Indianapolis - where there were 35 changes of the lead featuring 15 drivers - proved the real motor sport talking point of the weekend and Fernando's exploits played a large part.

While at Monaco, the drivers played second fiddle to assorted 'celebrities', including the wretched Ant & Dec, at Indianapolis is clear the drivers are the stars.

Other than accessibility and overtaking, another area where the Indy 500 scored over F1 is the fact the prize money is made public.

Last night Fernando attended the Victory Celebration, an event attended by all the drivers and their partners, and it was there he was confirmed as 'Rookie of the Year' which is understood to be worth an additional $25,000.

Next up is the Canadian Grand Prix, where the Spaniard can no doubt expect more penalties and more frustration.