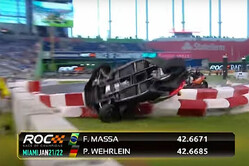 Pascal Wehrlein has confirmed he will miss opening test at Barcelona due to a "back issue", the result of his crash during the Race of Champions event in Miami last month.

For several weeks there has been speculation concerning the German youngster but it was only when reports began appearing claiming that he might miss the test that Sauber reacted.

"Re current rumours about Pascal Wehrlein in the media: The medical examinations are still ongoing," said the Swiss outfit. Therefore, the reports are pure speculation. We will provide information in due time."

As it happens, the speculation was correct, with Wehrlein this morning taking to social media to confirm the fact that he will miss the test.

"I have to skip the first winter test due to medical advice because of a back issue," he wrote. "I feel sorry for the team but we'll come back stronger!"

It's the first message on social media from the German since the day after the Miami crash which forced him to withdraw from the RoC Nations Cup following the crash the previous day during the Race of Champions.

"I'm very sorry to withdraw from today's ROC Nations Cup," said the German. "I'd really like to race again and I feel fine, but the doctors have advised me to rest so of course I will take their advice. It's no more than mild discomfort but my real priority for the coming year is my Formula 1 season.

"So while I'm sad to be missing out on all the action, I send my best wishes to my team-mate Sebastian Vettel and the rest of the competitors here in Miami and I wish them another exciting day's racing."

Vettel went on to win the Nations Cup single-handed which will not have helped the mood of Wehrlein whose Sauber seat was pretty much the last resort having been shunned by both Force India and Mercedes.

It is understood that 2016 GP2 runner-up, and Ferrari reserve, Antonio Giovinazzi will replace Wehrlein in Barcelona but this has yet to be confirmed by Sauber, Giovinazzi or Ferrari.