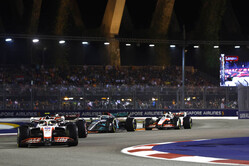 Both drivers started on Pirelli Cinturato Green intermediate tires after torrential rain fell during the race build-up, prompting a 65-minute delay to the start procedure. Magnussen started from ninth place but was involved in contact with Max Verstappen, causing damage to his front wing endplate, which race officials questionably deemed sufficient for a black and orange flag. That mandated an unscheduled pit stop, leaving Magnussen out of sync with his rivals, as he came in on lap 8 for fresh intermediates and a new nose section. Magnussen stopped again on lap 33, changing onto Pirelli P Zero Yellow medium tires once the circuit dried, the Dane bringing home his VF-22 in 12th at the checkered.

Schumacher started 12th and avoided trouble on the opening lap before settling into a rhythm in pursuit of the points-paying places. The German took on mediums on lap 34 and emerged in 10th after a safety car period caused when Yuki Tsunoda crashed. Unfortunately Schumacher sustained a left-rear puncture following contact with the Mercedes of George Russell and was forced to pit once more, taking on a set of softs - substantial race time lost in the process. Schumacher ultimately finished a lap down in 13th.

Kevin Magnussen: "I had very slight damage but it was nothing. I got the black and orange flag which to me seems unnecessary as the part wasn't about to fall off, there were no safety concerns as it has tethers to the car - it wasn't even moving. We finished P12 when we had an extra pit stop that I didn't need, so it's frustrating. It was a positive Saturday yesterday, and we've seen the car has some pace, so that's at least encouraging. Hopefully we can keep it up moving forward."

Mick Schumacher: "The contact with George (Russell) and consequently getting a puncture probably ruined our race. To finish P13 I think we can say in one way that we're happy that we finished, as not a lot of people did. Being the only rookie coming to the race to finish also is an achievement, so we can tick that box. We had the pace, we had the pace for points and unfortunately we just got unlucky. Nonetheless, we're going to Suzuka with a good feeling."

Guenther Steiner, Team Principal: "A disappointing race as we could've scored points here realistically, without dreaming of them. The incident on Lap 1 with Kevin, we lost all positions and again we received a black and orange flag, now for the third time, when there is no need for it. We have made it very clear to the FIA on the past two occasions and it's just like you have your back against the wall. Mick was very close to points, almost in it, and then he had contact with Russell and that put him out of the race for points. We showed what was possible, but we didn't bring any points home."