A new engine for Russell 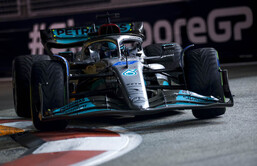 A new engine for George Russell will see the Briton start today's Singapore Grand Prix from the pitlane.

The youngster, who failed to make it into Q3 yesterday after suffering a handling issue, has taken on a complete new engine overnight, Internal Combustion Engine, Turbocharge, MGU-H, MGU-K, the lot.

Struggling throughout qualifying, the youngster was mystified by the car's performance.

"I had a recurring issue that we faced in FP1 where I kind of felt every time I got to the corner, I was kind of like picking up the throttle,” he told reporters.

"The car was just totally pushing on," he added. "I think we see this issue on the data, but it got progressively worse as qualifying continued. So I couldn't get around any of the low-speed corners. It was literally like someone was trying to push me from behind."

Asked if the team was aware of the cause of the issue, he said: "I don't know, to be honest. As I jumped out of the car, my engineer said we see something on the data. But it was there from the very first lap in qualifying, but it just got progressively worse.

"Regardless of how the performance is you never want to be starting P11 in a Grand Prix when you've got the car to be fighting for victory," he admitted. "There's been a safety car every single time we've been here. It's hopefully going to be a couple of pit stops as we need to try and do something different to our rivals. But it won't be a straightforward race."