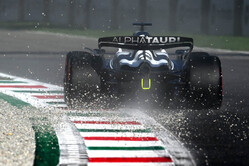 Pierre Gasly: "Overall, I am very pleased to make it into Q3. There was still some sliding in the high-speed corners, so I couldn't fully commit, but the track is amazing to drive. We made some changes after yesterday and they seem to have paid off, but there is still more to get out of the car for tomorrow. There are some faster cars starting behind us tomorrow, due to a number of drivers having penalties, but we've seen that it might be more difficult to overtake in the race compared to past years, because the slipstream effect is less with the new cars. Our aim is to stay in the points and, as we've seen in the past, anything can happen here."

Yuki Tsunoda: "Of course, we have the penalties this weekend, so our focus has been on our race pace rather than Qualifying, but I'm happy with the short-run pace we've had this weekend, I've felt quite comfortable in the car and we looked strong in Q1. I stayed in the car for Q2 in case I needed to help out my teammate - as tows can sometimes be useful around this track - but we decided that this wasn't necessary for Pierre in the end, so we didn't run. I will now focus on tomorrow's race, it's going to be difficult but it's possible to overtake here in Monza and there's a lot of people out of place tomorrow, so you never know what will happen."

Jody Egginton (Technical Director): "We gathered a good amount of tyre and aero data from Friday on both sides of the garage, so we had a good view on which way we needed to go to improve the car and the set-ups converged overnight. FP3 went smoothly today, with further data being gathered on all three tyre compounds and both sides of the garage heading into Qualifying in reasonable shape. Both cars navigated Q1 fairly easily, but given Yuki's penalties, once he was safely into Q2, there was no major incentive for him to make further runs. So, the focus shifted to maximising Pierre's opportunities. Following his first run, the expectation was that making the cut to Q3 was possible with a clean second run. However, as it turned out the cut-off was closer than anticipated, with some gravel on track at Turn 5 costing some lap time, but fortunately he made the cut for Q3. It'a shame that on his push Q3 lap track limits were exceeded at T6, meaning Pierre's best lap time was deleted and a position was lost to Ricciardo. However, with numerous PU penalties to be applied across the grid, we currently expect to be starting 6th tomorrow. We go into tomorrow's race with both cars looking reasonably competitive in the midfield, Pierre is well placed to fight for points and Yuki, although further back, has shown strong pace here so far this weekend and should move forward if we can find some clean air for him."