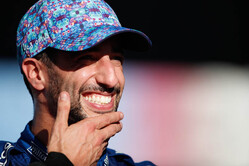 Lewis Hamilton says Daniel Ricciardo is too good to be employed as a reserve driver as Australian is linked with a move to Mercedes.

Having been dropped by McLaren just two years into his contract, Ricciardo's options for 2023 are limited, to put it mildly, with Alpine said to be targeting Pierre Gasly and AlphaTauri hoping to secure the services of Colton Herta.

Even back of the grid teams, Williams and Haas appear to have little interest in the 8-time Grand Prix winner, and as a result, having made clear that he wants to remain in F1, Ricciardo has been linked in a reserve role with a number of teams including Mercedes.

"I think he should be racing, personally," said Lewis Hamilton at today's press conference when asked about the speculation linking Ricciardo with the Silver Arrows.

"He's far too talented, and he's earned the right to be amongst us all racing," he added. "But, of course, if he's a part of our team that would be great... but third driver role is not really what's best for him. If I was managing him, he'd be racing.

"The truth is I'm keeping every option open for not only next year but the future too," said Ricciardo, who was sitting beside Hamilton.

"I still don't know what next year looks like," he added. "As Lewis said, I do want to be on the grid, I do want to race. I touched on it a few weeks ago, although this has been certainly a challenging time in my career, it hasn't taken the love of the sport away from me and that desire to still be here and compete.

"Obviously, many talks or thoughts about next year and beyond that have taken place, but I'm still not sure what that looks like."

The speculation linking Ricciardo with Mercedes has revived talk of Hamilton's future, though the Briton was keen to nip that particular one in the bud.

"For years we've going around, up-and-down with stories of retirement, stopping," he sighed.

"For me, I feel healthier than I've ever felt. I'm feeling fit, I love what I'm doing. And I don't plan on stopping any time soon... sorry buddy," he added, turning to Ricciardo.

"But, my goal was always to be with Mercedes since I signed with them in 1997, I love that we have the long partnership we have. I feel like we are embarking on a lot of really positive things, not only in the sport, but outside too. I think there's a lot more to accomplish together.

"So, I want to be a part of that. I think I'll always be with Mercedes... till the day I die. I feel like I can race for quite a bit longer. I'll potentially be steering towards that."

Check out our Thursday gallery from Monza here.