AlphaTauri closing in on Herta? 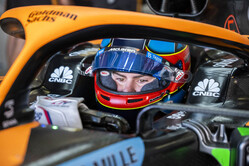 Despite not qualifying for a superlicence, AlphaTauri is understood to be close to signing Colton Herta, with Christian Horner eyeing the American as a future candidate for Red Bull.

Herta, who tested with McLaren during the summer, having signed on as a development driver for the Woking team in March, is currently racing in IndyCar with Andretti Autosport.

Having seriously impressed during his F1 test at Portimao, there has been speculation ever since over the possibility of him entering F1.

Other than not currently qualifying for a superlicence - of which more later - there is confusion as McLaren has an interest in a number of other IndyCar drivers.

For F1, Herta would be a major boost as the sport seeks to build on the success of Drive to Survive and further establish itself in the US.

"He an exciting talent," said Christian Horner over the Zandvoort weekend. "He's a younger American guy that's been a standout talent in the US, so it'll be very interesting to see how he performs in F1.

"And F1 obviously is growing in popularity in the US market at the moment," he continued, "and to have a successful US driver could be very interesting. It could be interesting for us, in the longer term. I mean, we've got contracts with our existing drivers, but AlphaTauri or Toro Rosso, they've produced a great stable of drivers for us to draw upon, whether it be Sebastian or Max or Daniel over the years."

However, there is the question of the superlicence, and while F1 CEO, Stefano Domenicali has said he will discuss the matter with the FIA, its president, Mohammed ben Sulayem has gone on record saying that he does not wish to compromise the integrity of the superlicence system.

"That's an FIA issue," agrees Horner, "we just need clarity for what is the situation regarding driver points, which hopefully will come sooner rather than later. Because that plays a key role obviously in the driver merry-go-round.

Short of the 40 points required in order to qualify for the licence, AlphaTauri is calling on the FIA to make an exception related to the 2020 IndyCar season - in which Herta finished third - which had a reduced number of races due to COVID.

"We looked at the regulations," Helmut Marko told SpeedCity Broadcasting on SiriusXM, "we discussed it with the FIA, and because of COVID there's a special regulation that you can take three years (from four) and also if one result isn't maximum points and outside the driver's hands they can give the points.

"So it's nothing unreasonable," he added. "He won seven IndyCar races and that's comparable to a Grand Prix I think, so it would be a shame if he wouldn't get a super-licence."

Asked the alternative to Herta, should the FIA refuse to relent, Horner said: "I think Pierre is doing a good job within AlphaTauri, so I don't think there will be a desire to change if there wasn't an interesting option available."

Asked if Herta will race in F1 if he is granted approval, Marko was in no doubt: "Astonishingly enough, all of the parties and teams involved, we found an agreement."