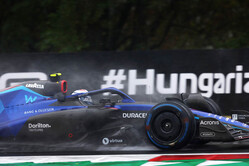 Ahead of today's sole practice session, the air temperature is 19.3 degrees C, while the track temperature is 22 degrees. As expected it is wet, very, very wet.

As a result all yesterday's work goes out of the window as the teams looks forward to a likely very wet qualifying. However, and herein lies the conundrum, tomorrow will be dry but much cooler.

Ten minutes before the start, the safety car heads out to check conditions, the rain having ceased for now.

While it looks likely the session will go ahead and start on time, the teams will not be willing to take any unnecessary risks.

The lights go green but there is nobody waiting at the end of the pitlane.

Four minutes in, Leclerc heads out on full wets, followed by his Ferrari teammate.

As the pair tippy-toe around the circuit they are joined by Norris and Zhou.

More drivers out, among them Alonso who opts for Inters.

"I think the Inters could be good," suggests Leclerc, "not too much aquaplaning."

Soon all bar the Bulls and Mercedes have been out, the floor on Hamilton's car being carefully checked by his crew.

Russell heads out as Gasly goes wide in Turn 4.

Like Gasly, a number of drivers are having problems at Turn 4, including Zhou and Albon.

"There a lot of standing water," reports Schumacher, as the German, other than Magnussen and Bottas, has the track to himself. The Finn subsequently pits, leaving the Haas pair to enjoy a clear track.

Making the most of it, Schumacher improves to third with a 45.156.

At which point Hamilton heads out, leaving the Bulls as the only no-shows.

Magnussen goes quickest in the first sector, as Stroll is told to lean on his tyres.

In quick succession, Vettel and Magnussen run wide at Turn 7.

Now it's Gasly's turn to go quickest in S1, however he subsequently spins at Turn 7.

Russell heads out on Inters with 24:00 remaining. "No grip," he subsequently reports, "struggling a lot."

As Norris improves to fourth with a 44.635, Perez heads out on Inters, as Ocon also switches to the green-banded rubber.

Hamilton heads out again, like his teammate on Inters. However, Russell is back in the pits.

More and more drivers are now switching to the Inters, among them Verstappen who appears for the first time, with just 17:00 remaining.

"There's no grip on this tyre," complains Hamilton, his opinion echoed by Ricciardo.

Alonso improves to sixth with a 44.659, as Hamilton enquires: "Are my tyres cold or something?" "We are struggling to generate temp," he is told.

Russell and Verstappen both run wide in Turn 7.

After spinning at Turn 3, Leclerc reveals: "Oh my god, my rear is like ice". By which we assume the rear of his Ferrari is like driving on ice.

Meanwhile Russell goes off at Turn 12 despite being on the full wets.

Currently, with 12 minutes remaining, the bottom five comprises Ocon, the winner here last year, the Bulls and the Mercedes.

"Everyone on a new set of Inters is struggling," Perez is advised.

"These tyres are just not working," reports Russell, as Vettel is off and in the barrier at Turn 12.

The stoppage comes at the moment Latifi - yes, Latifi - had gone quickest in S1.

The session will resume with 4 minutes remaining, but will anyone bother.

The session resumes and there is a queue at the end of the pitlane, with Latifi leading the way, ahead of Ricciardo, Russell, Zhou, the Ferraris and Hamilton. All are on Inters.

Norris and Hamilton both run wide at Turn 7.

Russell improves to fifth, while Hamilton is eleventh and Perez remains 20th.

An interesting session, and over the next couple of hours the teams will have a clear choice, whether to focus on what looks set to be a dam qualifying or a dry race.

Check out our Saturday gallery from the Hungaroring here.