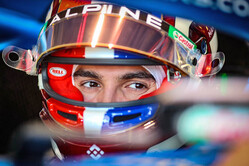 The team is gearing up for its home Grand Prix in France this weekend at Circuit Paul Ricard. After going level for fourth in the Championship, the team is aiming to push forward with a strong outing on home turf. Team Principal Otmar Szafnauer previews the team's home race.

How much is the team looking forward to its home race in France?
Otmar Szafnauer: "It's always exciting when it's a home Grand Prix, and we're looking forward to flying the French flag on home soil at Circuit Paul Ricard this weekend. Racing at any Grand Prix is special but when it's in front of a home crowd, it just makes the experience even more enjoyable and humbling. It makes all the staff at Alpine very proud to be part of a Formula 1 team and we're aiming to do everyone proud on track this weekend. There are plenty of unique activities this weekend to celebrate the team's home race, so it will be a great experience on many levels for everyone involved."

After double points and going level with fourth in the championship, what's the main reflection after Austria?
OS: "Again, we've demonstrated that we're competitive, even if it was not a perfect weekend. We're working hard on not only short-term fixes but also long-term solutions to prevent the issues we experienced in Austria from coming up again. Our most recent performance in Austria last weekend was a good benchmark on the improvements we've made this season. We're tied for fourth on points in the championship and now the next step is to solidify that spot, and that means executing clean weekends with regular points from both cars. We have back-to-back Grands Prix coming up and it's important we come away with strong finishes from both of those to tighten our grip before the summer break and that's our collective focus point right now."

What was the cause of the car issues in Austria and what upgrades is the team bringing to its home race?
OS: "We identified that we had a power box failure, which powers the ECU, as the root cause for Fernando's non-start in the Sprint and containment is in place to prevent a repeat. On Esteban's side, we've worked on a fix for the high-pressure fuel pump, while exploring simultaneously what Bosch, the supplier, has done to fix what is for us a recurring problem. We aim to see the end of these issues as we know maintaining this high level of performance along with minimal reliability problems will be vital in achieving our season goals. In terms of upgrades for France, we have an update to the floor flank, which we're looking forward to testing with both cars on Friday."

What is the target for this weekend's French Grand Prix?
OS: "We want to have a productive Friday practice to further understanding and best prepare ourselves for Saturday and Sunday. From there, like every race, having both cars well inside Q3 and then putting together a good race with a good haul of points would be a solid weekend for us. What would please me most at our home race is piecing a clean weekend from start to finish and maximising the full potential of both cars and both drivers to really firm up our push for fourth in the championship. We hope all the fans enjoy the home Grand Prix of the team with some exciting racing!"

Esteban Ocon sets foot on home turf this weekend for the 2022 French Grand Prix. Fresh from a season high fifth position in Austria, Esteban will look to continue his form in front of a home crowd at Circuit Paul Ricard and continue his climb-up the drivers' standings.

It was quite the 100th Formula 1 Grand Prix for you, how do you reflect on it?
Esteban Ocon: "It was definitely a very positive weekend with a good haul of points in the Sprint and on the main race on Sunday. As a team, we are continuing our momentum forwards after delivering some good upgrades to the car at recent events. It's true we've seen some reliability issues in the last couple of races, but the team is working hard to get on top of those so we can have a smoother second half of the season. But all in all, I am going into my home race full of confidence and hoping to deliver a good show for the fans."

It's the team's home race and the home race for you. Do you feel more pressure or expectation when you're racing in your home country?
EO: "Not necessarily no. It's true that it gets very busy and there are more commitments than usual in the lead-up to the race and all throughout the race weekend, but that's part of the fun. There isn't a feeling quite like racing in your own country and seeing the passion of the home fans when arriving to the circuit, or, in the grandstands when driving past. I'll also have my own grandstand this weekend which is a first for me and a dream come true. I know the atmosphere will be amazing in the ‘Esteban Ocon Grandstand' and throughout the grounds in what is a sold-out race weekend. I don't see all this attention during a home Grand Prix as pressure, but rather as motivation. I want to do my fans and all of France proud in all of the races I participate in, but especially at the French Grand Prix. Only a handful of drivers are lucky enough to have a home race, so I will enjoy every minute of this weekend."

As a track what are your thoughts on the Circuit Paul Ricard?
EO: "It's always special going back to Le Castellet, a track we all know well. It's a circuit famous for its mix of high-speed straights and the demanding sequences of low and medium-speed corners. The low-speed section heading onto the Mistral straight is tight and requires a flexible set-up on the car. Then you have the faster, more technical section from Signes until the last corner which is quite demanding on the tyres. Qualifying is important here and getting the set-up right for Saturday afternoon will be key. I enjoyed the days off after Austria, but I am ready to jump back in the A522 and get my home Grand Prix weekend started."

Fernando Alonso has his sights set on a seventh top-ten finish in a row this season at the team's home Grand Prix in France. Having won multiple races in France before, Fernando will be looking to convert his strong on-track performances of late into a big points haul for him and the team.

What are your reflections on a competitive weekend in Austria?
Fernando Alonso: "I am pleased with my performance during the weekend in Austria. It was a fun race but not easy. First, the issue we had before the start of the Sprint meant we started the race on Sunday from the back row. And then, during the race we pitted during a Virtual Safety Car and I felt some unusual vibrations, so we pitted again, and this stop cost us time and positions. I was able to fight back to tenth in the last few laps. Had it not been for this misfortune, we were easily in the fight for sixth. The car felt very good, and I would say it was my most competitive Grand Prix of the season. If we can put this bad luck aside, then there is no reason why we can't have a very good points haul at the next races, starting with France this weekend."

It's the team home race in France. Do you enjoy racing there?
FA: "It's always fun to race in front of the French fans. Half of the team is based in France and so it's good to have a home race for us at Circuit Paul Ricard. It's a fun track and whilst I've raced at various French race circuits, I've only competed here twice before in Formula 1. It's a challenging circuit to get the car setup right, with quite a few high-speed sections followed by various low and medium speed corners. We seemed quite competitive at various circuits this year, so hopefully we can keep this up at Paul Ricard."

You have achieved six points finishes in a row, a run only currently bettered by Lewis [Hamilton] and Max [Verstappen]. Are you pleased with your performances of late?
FA: "I am very happy with my performances. I feel I am physically driving better than ever! Luck has been our biggest issue. It has often escaped us at crucial moments this season. If we can turn this around and get the luck that we deserve as a team, then I'm confident we can score big points and start to climb both drivers' and constructors' standings."