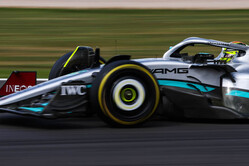 The British Grand Prix was won by Ferrari driver Carlos Sainz from pole - but that only tells half the story. The race was restarted after a red flag on lap one, with all but two drivers (McLaren's Lando Norris and Daniel Ricciardo) changing tyres.

The timing of a safety car in the closing stages of the race was another pivotal moment. It came at just the right time for Red Bull's Sergio Perez, who recovered to second place after a poor start, but disadvantaged Ferrari's Charles Leclerc, who stayed out on well-used P Zero White hard tyres and slipped down to fourth. Leclerc was in the lead at the re-start, but was passed by Sainz, Perez, and Hamilton on new P Zero Red soft tyres in the closing stages.

All three compounds played a key role, with hard, P Zero Yellow medium, and soft seen on the original starting grid. There were three different strategies used by the top four, contributing to some breath-taking battles all the way down the field.

Among those duels was a fight that went down to the last corner for seventh place between Red Bull's Max Verstappen and Haas driver Mick Schumacher - with the latter scoring his first Formula 1 world championship points today.

Mario Isola: "First and most importantly, we are all incredibly relieved and grateful that the drivers involved in the scary first-lap crash are OK: a testament to the incredible safety standards in the sport. After then, we saw one of the most thrilling races in recent memory, with battles all the way down the field and tyre strategy providing a key element. For anyone still asking if the 2022 new package of cars and tyres has improved the show and helped overtaking - here is your answer!"