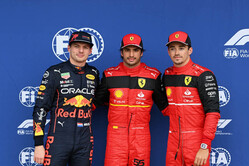 Ferrari driver Carlos Sainz took his very first pole position after a qualifying session run in rainy conditions from start to finish. The Cinturato Green intermediates were used throughout qualifying, run in 15 degrees ambient and 19 degrees of track temperature.

Despite the wet conditions, the intermediates provided optimal grip under the circumstances, with the top speed reached today being close to 300kph. The intermediate evacuates around 35 litres of water per second at 300kph, while the full wet disperses around 85 litres per second at the same speed.

As well as being a first pole position for Sainz today, it was also a first appearance in Q3 for Williams driver Nicholas Latifi.

The Pirelli Pole Position Award was presented to Sainz by a British lion: Nigel Mansell, nicknamed 'Il Leone' when he was a Ferrari driver. Mansell won the world title in 1992 and won the British Grand Prix four times (as well as the European Grand Prix once in England).

The quickest strategy for the 52-lap race is going to be a two-stopper, with a few different options on the table.

The P Zero Yellow medium is the tyre to start on, and the quickest strategy on paper is medium followed by P Zero White hard followed by medium. This has the advantage of ensuring that two different compounds are run earlier in the race, opening up strategic possibilities.

For those who don't have a second set of mediums available, the strategy could be medium-hard-soft, which is also closely-matched - and could be converted to a one-stopper if needed. A one-stopper is possible but hard to manage: this would be medium to hard.

As always, this also depends on which tyres the drivers have left in their allocations, and what the conditions are like tomorrow. It's expected to be dry, but there is a risk of some rain showers, and the cooler the temperatures, the more the softer compounds are favoured.

Mario Isola: "Even though the intermediate tyre was not designed to cope with aquaplaning situations, it coped very well with the conditions today, allowing the drivers to reach nearly 300kph in wet conditions with comparatively long stints as the surface dried out. This is a track that puts lots of energy through the tyres, allowing a dry line to emerge. In the dry conditions of FP3, most drivers ran the soft tyre, and we expect the medium to be the main race tyre tomorrow if conditions are dry - which is not entirely certain - with a two-stopper being the best strategy."