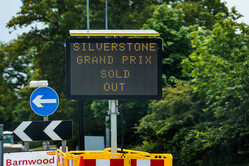 With four races over the next five weeks, the British Grand Prix at Silverstone kicks off a very busy July for Formula One.

Since Brands Hatch was dropped from the calendar, Silverstone really has become the 'Home of British Motorsport', certainly as far as F1 is concerned, having exclusively hosted Britain's round of the world championship since 1987.

Between 1963 and 1986 the race alternated between the two circuits, with Aintree also having hosted the Grand Prix five times between 1955 and 1962.

However, having hosted what was to be the first ever round of the Formula One World Championship in 1950, Silverstone holds a unique place in the sport, indeed in 2020 the sport marked the historic occasion by hosting back-to-back races at the Northamptonshire track, the second of which was referred to as the 70th Anniversary Grand Prix.

Ironically that 1950 race was attended by King George VI, and though other members of the royal family have attended events since then, the Queen Elizabeth never has.

A former RAF airfield, as one would expect Silverstone is flat and featureless, nonetheless it has provided plenty of memorable races over the years and the magnificent golden trophies presented to the winner sport a veritable who's who of some of the sport's finest drivers.

Of course, having hosted the race for so long Silverstone has witnessed its fair share of drama and controversy, be it Michael Schumacher's infamous black flag in 1994, the multi-car pile-up in 1973 or even last year's clash at Copse which saw Max Verstappen punted off the track as he fought with Lewis Hamilton on the opening lap.

Other than controversy and incidents, Silverstone has witnessed its fair share of track revisions over the years, and today's layout is barely recognisable compared to 1985 when Keke Rosberg averaged over 160 mph in qualifying for the Grand Prix.

In the name of safety, and probably with a nod to broadcasters, the track is now less high-speed and more about tight, twisty bits and slow corners that look good on TV.

Interestingly, as the sport moves more towards anonymous street tracks, Silverstone, along with Monaco and Spa Francorchamps, is the only track where engineers, commentators and certain website editors still refer to the corners by name rather than number.

Keeping F1 at Silverstone hasn't been easy however, for former F1 supremo, Bernie Ecclestone fought a long war with its owners, the British Racing Drivers Club, in a bid to increase hosting fees while also having the circuit modernised.

So keen were officials to retain the race, which at one stage looked to be a lost cause, they undertook a massive overhaul of the facilities, including the pit and paddock complex which saw them fall into serious debt.

While the future of the Grand Prix seems a little more certain these days, in the need to meet the hosting fee the organisers are looking at following COTA's example and running pop concerts over the weekend, while a luxury residence complex is being built alongside on section of the track.

Looking ahead to this weekend's race, with four wins from the last five races Max Verstappen must be feeling very confident. Teammate, Sergio Perez suffered a gearbox issue last time out, but Red Bull must be feeling confident that it can further extend its championship lead(s).

Having taken an engine penalty in Canada, Charles Leclerc was hampered from the start, but this weekend he will no doubt get to use his new unit in a bid to take full advantage. Meanwhile, teammate, Carlos Sainz, still to score that maiden win, will be determined to remain in the fight.

Mercedes assures us that porpoising is a thing of the past - though the W13's stiffness remains an issue - and therefore Lewis Hamilton and George Russell are both hoping to kick-start the German team's season.

Winner of seven of the last eight runnings of the event, at any other time Hamilton would be red-hot favourite, but with doubts remaining over the pace of the W13 it is unlikely that the seven-time champion will be standing on the top step of the podium come Sunday.

That said, what a story it would create for Drive to Survive, so don't rule out the Stevenage Rocket or his teammate, who would dearly love to score his maiden F1 win on home soil.

With seven of the ten teams based in Britain, Silverstone is the 'home race' for a majority of the grid, and while there is no technical advantage, other than the fact that the crowd is usually quite partisan, the close proximity of the teams' respective HQs often proves beneficial when it comes to set-up changes over the course of the weekend.

Furthermore, with their factories nearby, teams are able to introduce updates far more readily, and this is certain to be the case this weekend.

Along with Suzuka and Spa in Belgium, Silverstone places the highest energy demands on tyres all year, which is why the hardest tyres in the Pirelli range have been nominated. Ultra-rapid and high-energy corners such as the Maggotts and Becketts complex aren't the only challenge that Silverstone has to offer though, for the weather can be extremely variable, from bright sunshine to heavy rain.

Last year's race was won with two tyre changes: one of them taking place under an early red flag period following the collision between Hamilton and Verstappen. Nearly all the drivers completed two stints on the medium plus a final one on the hard.

Check out our Thursday gallery from Silverstone here.