Sainz: I was really, really pushing 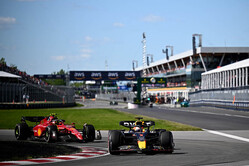 Carlos Sainz is left with "mixed feelings" after failing to overhaul Max Verstappen despite his fresher rubber.

All in all, the Canadian Grand Prix was nothing like the thriller we had all hoped for.

However, a late safety car after Yuki Tsunoda went off into the barriers, kicked new life into the race as it bunched up the field and provided us with the prospect of a thrilling fight to the finish.

Having inherited the lead when Max Verstappen pitted on Lap 43, Sainz took the opportunity to pit under the safety car, returning to the fray on hards that were six laps fresher.

From the moment the safety car was withdrawn Sainz was all over Verstappen, but to no avail, finally giving up the ghost around halfway through the final lap.

"Mixed feelings," admitted the Spaniard at race end. "P1 was very close today and I was certainly, for the first time this year, the fastest man on track and pushing to the absolute limit to try and put some pressure on Max and maybe force him into a mistake.

"It was close a couple of times," he added. "It's a shame, but at the same time I will take the positive and know that today the pace was there, and I was feeling at home and able to push Max to the limit.

"The positive is that this weekend, the pace has been there all weekend. I was quicker in the race and managed well my tyres. Even without that safety car I think I could have hung it out for the race win, with Max coming from behind, so that gives me hope.

"I was pushing flat-out, close to the walls, all over the place with the kerbs and everything. I was really, really pushing," he grinned. "This gives me confidence for the future. It's a shame that where I had the best pace, the win didn't come but it was still very good."