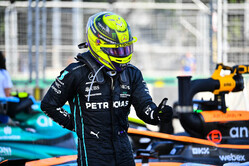 Describing the W13 as a "sh*t-box", Mercedes boss, Toto Wolff has warned that Lewis Hamilton could be forced to sit out next weekend's Canadian Grand Prix.

In the moments after the Azerbaijan Grand Prix, having taken a pounding for over ninety minutes, the seven-time world champion could be seen slowly extricating himself from his car, the pain obvious.

With the rules insisting that he climb from the car unaided, the Briton finally got free, subsequently admitting that throughout the race he had been praying for it to end.

"Lewis, we all know this is a bit of a sh*t-box to drive at the moment," Wolff told his driver. "I'm sorry for the back also, we will sort ourselves out."

"I was just holding and biting down on my teeth due to the pain," the Briton subsequently told Sky Sports, "the adrenaline helped.

"I cannot express the pain that you experience, particularly on the straight here," he added. "At the end you are just praying for it to end. But we were in such a good position still, third and fourth, a great result for the team. The team did a great job with the strategy.

"Once we fix this bouncing we'll be right there in the race," he insisted. "But we were losing, for sure, over a second just with bouncing... or at least a second with bouncing.

"I'll be at the factory tomorrow, we've got to have some good discussions and keep pushing."

"He's really bad," admitted Wolff, "we have just got to find a solution.

"At this stage I think he is maybe the worst affected from all drivers," he continued. "But pretty much everyone, as far as I understood from the drivers, said that something needs to happen."

Asked if the Briton's obvious discomfort puts him at risk of missing next weekend's race, at a track likely to be just as punishing, the Austrian said: "I haven't seen him and I haven't spoken to him, but you can see this is not muscular anymore.

"This goes properly into the spine and can have some consequences. I don't think this is only Lewis' issue. He's the one that is probably worst affected. But generally, it also affects George and many others. The solution could be to have someone on reserve, which we have anyway at every race, to make sure that our cars are running."

From the outset of the weekend, teammate George Russell has been calling on the sport's powers that be to consider looking at the rules, the Briton warning that the sport could soon be looking at a "major incident" as a result of the effects of the pounding the drivers are taking.

However, it has now emerged that technical measures to ensure a minimum ride height, which would have eliminated the threat of porpoising, but would have compromised performance were rejected by the teams.

Asked about this at the post-race press conference, Russell replied: "I think that was totally understandable because every single team is understanding and developing their cars around a set of regulations, and any change, nobody knows what is going to be the consequences.

"I think we voted against it," he admitted. "And even now, we want change but who knows what that change is, it's just us, 20 drivers, we would choose to have a safer ride out there and when you're going 300kmh between the walls and you barely can keep the car in a straight line. I couldn't even see my pit board, the car was moving around so much.

"We have the technology in Formula 1 to resolve this with a click of our fingers, I believe, so as I said, nobody's looking to take advantage from this, we're just looking for a safer, easier solution."

Whilst more and more drivers are calling for action, the fact is that some teams (and their drivers) are suffering more than others, most likely because some teams are putting performance first.

While this is understandable, the fact is that one cannot have one's cake and eat it, and perhaps if teams are so concerned about their drivers well-being and comfort they should look into ride height... certainly after rejecting the proposal that would have alleviated the problem in the first place.