F1 an "important platform to use our voices", says Hamilton 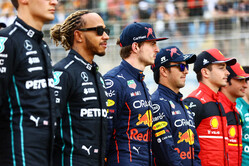 In the wake of Mohammed Ben Sulayem's claim that drivers' activism risks F1 becoming too political, Lewis Hamilton has urged his fellow racers to speak out more.

The seven-time world champion and Sebastian Vettel were singled out, along with Lando Norris, by the FIA president this week, when he essentially accused them of using their position within the sport to impose their views on others.

In the wake of the subsequent backlash on social media, Ben Sulayem was forced to ease back on his comment.

"As a driver, I have always believed in sport as a catalyst of progress in society," he tweeted. "That is why promoting sustainability, diversity and inclusion is a key priority of my mandate. In the same way, I value the commitment of all drivers and champions for a better future."

Indeed, as the drivers gathered for today's FIA press conference, the sport's governing body announced that it had appointed the first ever Equality, Diversity and Inclusion (EDI) Advisor dedicated to motor sport, a move that formed part of Ben Sulayem’s manifesto when contesting the presidency last year.

Asked about Ben Sulayem's comments, Hamilton said: "The sport is continuously growing. We have a bigger audience than ever, it continues to be an important platform to use our voices.

"Every single one of us here, within our industry, within our companies, can do more to speak out more on things to sparks more conversations," he added. "It's moving at a very slow pace. We need more people to utilise their platform. I encourage all the drivers to be more outspoken in the future about things they care about. I'm proud to see what Seb does and to be an ally of his."

"The topics that Lewis is continuing to raise, the issues Lando has been talking about and the stuff that I've been mentioning, I believe they are topics that are very important to be addressed," said Vettel. "And they are bigger than us, bigger than a sport can ever be.

"It is important to mention those, express those and to raise awareness to make people aware that there's still lots of things that we can improve on."