Too much of one, not enough of another 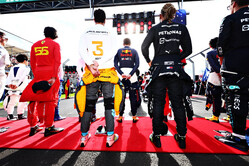 In many ways, Formula One is currently enjoying something of a modern day resurgence.

No doubt for many of you reading this, you'll have your respective favourite eras, but the sport is arguably much stronger now than it has been at any time in recent history, due to several key factors.

For a start, a blockbuster title fight in 2021, after years of one team dominance, helped capture the world's imagination. Regardless of your opinions on how the title was won, the fact that it went down to the final race of the year between two drivers from different teams resulted in the season becoming one of the all-time classics.

Furthermore, the addition of exciting young talents including Max Verstappen, Charles Leclerc, George Russell and Lando Norris, and the incredible success of Netflix's Drive to Survive series, has also help to attract multitudes of new and younger fans, regularly resulting in races - most recently Spain and Monaco - being fully sold out. Despite the majority of countries still airing races on pay-to-view channels, TV audiences are very healthy too, and have been increasing year-on-year over the past few seasons, bucking a worrying trend seen by many other sports, including even the Olympics.

Meanwhile, the new for 2022 regulations seem to have achieved some of what they were created to do. On the evidence of the first seven races, cars can now follow and race much more closely than before, and we've heard far fewer complaints from drivers about dirty air.

All of this is in stark contrast to just a handful of years ago, and the cloud of negativity that seemed to follow F1 wherever it went in the final days of the Bernie Ecclestone-led era. An aging and declining audience combined with poor promotion, and a lacklustre and underwhelming racing product, led many to loudly proclaim that it was "dying" as recently as 2016.

However, since Liberty Media's acquisition for $4.4b in 2017, it is hard to deny that Formula One is in a far healthier place now than it was before. F1 is being considered a success story, and a case study for other sports to follow in how to modernise and attract new audiences.

Sure, not everything the US media company has done has been universally popular with fans - there have been frequenty complaints of the sport becoming more "Americanized" - but you only have to see the increased popularity of F1 in the States as just one example of how things are changing.

Historically, this was always a country F1 had a tricky relationship with - never truly generating much traction in what is a hugely important market for manufacturers and sponsors. But just last year, the Circuit of the Americas saw a record three day combined attendance of 400,000 people for the Grand Prix in Austin. Further races in America, including Miami and Las Vegas, were subsequently added to the calendar - the former for this year, and the latter being included for 2023.

It seems like the world can't get enough of Formula One at the moment - the consequence of this, of course, being the still rapidly increasing calendar. Before the cancellation of the Russian Grand Prix this year, the season would have been 23 races long - a new record. The aforementioned races in the United States are unlikely to be the last new additions either. Stefano Domenicali, F1's boss, recently stated that there was the "potential" to go up to 30 races, with a return to South Africa being the next likely destination.

It has also meant that historic venues - including even Monaco - are under increased pressure to retain their spot on the calendar, such is the demand.

However, more is not necessarily better - at least, not in the case of races.

The punishing schedule has an effect on everyone who works in Formula One, including drivers, team members, journalists and countless others. Whilst you may, naturally, have little sympathy for the former due to their salaries and their ability to travel in the comfort of a private jet or first class, it is important to remember the hundreds of other people who also work in the sport, and the effect the increasing calendar has on the time (or lack therefore) they get to spend at home with family and friends.

Of course, the counter-argument is usually this: if the travel demands are too great, don't work in F1. But that rather simplistic statement ignores the fact that for many, the calendar has increased significantly in their time working in the sport.

With the notable exception of the Covid affected 2020 season, over the last decade the trend has been for seasons to begin earlier, and finish later - the 2021 season concluded less than two weeks before Christmas Day, for example. Additionally, recent seasons have seen increased numbers of double or even triple headers on the calendar - something that is set to continue.

All of this may increasingly put more people off working in F1 - or be the catalyst for those who are already there to step away. Prior to signing a two year contract extension with Red Bull, Sergio Perez stated earlier this year: "We basically have zero time for ourselves and for our families. I have a couple of young children. I think if the calendar [expands] more, I will not do it."

There are other issues with having such long seasons - namely the important environmental concerns associated with criss-crossing the globe so frequently - and how many people really want to sit through a 30 race season if one team is comfortably head-and-shoulders above the competition, and strolling to the title with ease, as we've seen so often in recent years?

So, whilst F1 is in danger of having too many races, there's one thing it still has not enough of - teams. Yet, rather bafflingly, on the evidence of this year, the sport seems reluctant to welcome new entrants.

The recently introduced cost cap, set this year at $140m, has suddenly made F1 a much more affordable and achievable aim for both independent teams and manufacturers - with the most recent to confirm an interest being Andretti Autosport.

Andretti is an iconic name both within the history of F1, and motorsport as a whole. Mario Andretti won the 1978 World Championship, whilst the Andretti Autosport outfit - founded and owned by Mario's son, Michael -has long established itself as one of the three powerhouse teams in IndyCar, alongside Ganassi and Penske.

Currently on Andretti's driver roster is Colton Herta - an exciting and highly talented prospect - with many predicting the 22 year old to become the next American to break into Formula One, which would surely only boost the increased interest in the States.

The American team has already attempted to secure a place in the F1 paddock - with talks to take over the Alfa Romeo Sauber team collapsing late last year.

However, their latest attempt at an entry is with what would be a new team, with the target of being on the grid by 2024. On paper, they have everything they need. Financial backing is reported to have been secured from insurance holding company Group 1001, and they even have a formal agreement with Renault to be the team's power unit supplier.

They're even confirmed that they're willing to pay the ridiculous $200m franchise fee needed to secure an entry - this being the "anti-dilution" fee intended to compensate F1's existing teams for any dilution of the sport's prize fund.

Yet, despite all this, there still appears to be a great deal of hesitancy from some to accept Andretti's entry. Recently, Mercedes team boss Toto Wolff rather haughtily claimed Andretti still needed to prove that it "deserved" an entry, whilst, even more worryingly, Domenicali claimed that he thought F1 already had enough teams, and that anyone else wishing to enter had to be "really significant".

This view is spectacularly short-sighted, even by F1's own standards.

The lack of available seats on the grid was once again put into clear perspective earlier this year when 2021 F2 champion, Oscar Piastri, failed to secure a drive. Despite the Australian having won the F3 and F2 titles consecutively, both during his debut season in the categories, the lack of options for this year has meant he's spending 2022 on the side-lines, whilst hoping he has done enough to secure a drive for 2023.

Piastri's situation is far from unique - in previous years, there have been other deserving talents who have missed out - and it's looking unlikely at the moment that any of 2022's top F2 drivers will earn an F1 promotion for next year.

Of course, F1 has had more than ten teams and 20 cars on the grid before. Only a decade ago, there were 24 cars on the grid - and even further back, in the late 1980s, the car count was so high - often in the high 30s that pre-qualifying was necessary. By comparison, the grid of 20 cars today is the bare minimum a World Championship like Formula One should have. The sport has already been lucky in recent years that the Force India squad (now Aston Martin) was saved by Lawrence Stroll - otherwise there is the genuine prospect that the grid could have dropped below ten teams.

As Domenicali stated himself, none of the current teams are now in that sort of financial strife. However, if we've learnt anything from the past couple of years, it is that is nothing is certain in life - and it is not an unrealistic scenario that a global financial crisis could easily put one or two of the smaller teams out of business. F1 should be doing more now to protect itself from such an eventuality - more teams on the grid ensures more places for exciting talents like Piastri, and also means that there's increased job security for people currently working at a team, should the worst ever happen.

There has been much speculation recently about the VW Automotive Group's pending entry to Formula One - the "really significant" entry Domenicali alluded to. It is very likely that we'll hear official confirmation of both Porsche and Audi's intentions to enter the sport by 2026 in the coming weeks.

However, whilst it will be huge news, even this is unlikely to increase the grid size. Porsche, it is believed, will enter initially only as an engine supplier, partnering with Red Bull with the option to eventually take over the team, should Red Bull at some point decide to reduce their involvement. Audi is also likely to acquire an existing team for its entry - Williams, Sauber or Aston Martin the rumoured targets. Andretti, in comparison, would be an entirely new team and add a further two cars to the grid.

Should the Andretti entry be rejected - despite having the necessary infrastructure and financial backing, not to mention extensive racing history - it would set a dangerous and deeply worrying precedent.

This new cost capped era was intended to allow more teams the chance to enter the pinnacle of motorsport - yet, how would it appear, if the first to show an interest is declined?

The reluctance by some teams to allow Andretti to enter appears to be entirely self-serving, due to their desire not to have a further team with which they have to share prize money. Perhaps it is some teams' wish that the grid does drop below 20 cars - so that the old suggestion of three car teams can return, and the terrible triumvirate of Red Bull, Mercedes and Ferrari can further increase their already powerful position?

If that was to happen, it would be a deeply sad moment for F1. The sport's long history has thrived upon independent entries such as Andretti - for these have been the ones who have remained on the grid, even as the big budget manufacturers have come and gone on a whim.

So, for all the good that Formula One has done since 2016 - let's hope the powers that be soon see sense on these two issues. Fewer races and more teams would be entirely preferential to more races and less teams.