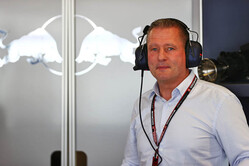 Christian Horner could be in for a 'Verstappen-slappen' as world champion's father, Jos criticises Red Bull for failing his son with its strategy in Monaco.

In all honesty, Max never looked entirely comfortable at any stage over the Monaco weekend, while teammate, Sergio Perez did.

Then, come qualifying, the Mexican out-paced his teammate to line-up third on the grid.

In the opening stages of the race - when it actually got underway - continued in third, before dropping to fifth when he pitted on lap 16.

Within a couple of laps he was up in second, courtesy of Lando Norris, race leader Charles Leclerc and Verstappen all pitting.

When Carlos Sainz pitted a lap later, on lap 21, Perez inherited the lead, and courtesy of his pace over the course of the lap, combined with Ferrari's strategic faux-pas, maintained the lead which he was to hold to the end of the afternoon.

However, according to Jos Verstappen, the Austrian team should have been more aggressive with its strategy.

"As a father I was disappointed with the race," he writes on the official Verstappen website. "Max's third place was very disappointing.

"We all saw that it was a difficult weekend for him," he continues. "It starts with the car, which simply doesn't have the characteristics for his driving style yet. Max has far too little grip at the front axle. And especially in Monaco, with all those short corners, you need a car that turns very quickly. That was just hard.

"Red Bull achieved a good result," he admits, "but at the same time exerted little influence to help Max to the front. That he finished third, he owes to Ferrari's mistake at that second stop of Charles.

"Perez actually won the race because of the earlier pit stop," he insists. "The team can perhaps explain that as a gamble, but they had already seen, with for example Gasly, that the intermediates were the best option at that time.

"I would have liked them to go for Max, but of course I am not entirely objective. I think 10 points from Max have been thrown away here. Especially with the two retirements we've had, we need every point. Don't forget that Ferrari currently has a better car, especially in qualifying.

"Max also had bad luck in qualifying, because in his last run he was significantly faster and on his way to second place, until the crash of Perez. Then everything would have been different."

However, not wishing to sound too bitter, the veteran former Benetton, Arrows and Minardi driver finally pays tribute to the race winner.

"Apart from all this, I am happy for Checo," he writes. "Winning in Monaco is of course something special and I hope he enjoys it. From now on, it's full focus on the next races in Baku and Canada.