Red Bull to launch its own investigation into IP saga 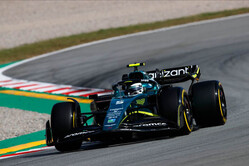 Stating that any transfer of intellectual property would be "totally unacceptable" and a "criminal offence", Christian Horner confirms that Red Bull will launch its own investigation into Aston Martin's 'clone'.

While the FIA might have cleared Aston Martin of any wrongdoing in terms of 'copying' the Red Bull, the Austrian team remains unconvinced and is therefore launching its own internal investigation.

As opposed to the tRacing Point saga, Red Bull is concerned that it is the movement of staff between teams that could be at the heart of the issue, particularly in terms of former technical director, Dan Fallows who joined Aston Martin in April following a long period of gardening leave after his recruitment was announced last July.

Shortly after the FIA released its statement, Red Bull responded with a brief official comment of its own.

"Oracle Red Bull Racing have noted the FIA's statement with interest," it read. "While imitation is the greatest form of flattery, any replication of design would obviously need to comply with the FIA's rules around 'Reverse Engineering'. However, should any transfer of IP have taken place that would clearly be a breach of regulations and would be a serious concern."

"Imitation is the biggest form of flattery at the end of the day," Christian Horner subsequently told Sky Sports. "And it's no coincidence we've had a few individuals who have transferred from Red Bull to Aston Martin over the winter and the early part of this season.

"It was actually brought to our attention by the FIA earlier in the week when they said, 'We've got a car which looks remarkably like yours, can we have a list of your leavers to see where they went?'," he continued. "Of course, that immediately raises alarm bells."

While confirming that his team will hold its own investigation, he called on the FIA not to close the book on the saga.

"We will have an internal investigation," he admitted. "We've got our own software protections, we know exactly where our software is looked at and where it is controlled.

"However, it's the job of the regulator, the FIA, because they have the access and we rely very much on them to ensure there is no transfer of IP and no abuse of that.

"We see it up and down the paddock," he added, "individuals move from team to team after a gardening leave period. What individuals take in their head, that's fair game and is their knowledge. What isn't fair and totally unacceptable is if there has been any transfer of IP."

Ignoring the fact that Red Bull Powertrains has recruited quite a few high-profile names from Mercedes, when asked if he has any proof of wrongdoing, he replied: "I'm not going to disclose exactly where we are with certain individuals, but it would be a criminal offence.

"Ideas are a team's lifeblood," he continued, "it's what we invest millions of pounds into and you wouldn't want to see that just turning up in a rival organisation."

As ever, team 'consultant', Helmut Marko was even more forthright in his observations, insisting that there is "evidence" of wrongdoing.

"As things stand, copying isn't forbidden," he told Sky Sports Germany. "But you must also take into account that seven people were poached from us and that our chief aerodynamicist joined Aston Martin with a disproportionately high fee.

"There are still some facts that we are checking," he added. "We will look into it in detail. There is evidence that data was downloaded.

"Dan Fallows was on gardening leave," said the Austrian. "What he has in his head... copying is not prohibited in the approach, but can you copy without documents and then make such a detailed copy of our car?"