Kubica to drive in opening practice at Barcelona 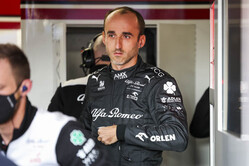 Kubica, who was the first to take the wheel of the car in pre-season testing, at the same Catalonia venue that will see this weekend's action, most recently drove the C42 during a Pirelli test session in Imola, less than a month ago.

These fresh memories of the car will enable the Pole to make the most of Friday's one-hour session, providing the team with the technical feedback that has made him a valuable asset for the team.

He will drive the car of Zhou Guanyu, with the Chinese driver returning to the cockpit for FP2 and the remainder of the weekend.

Since joining Alfa Romeo, Kubica has taken part in a number of FP1 sessions, while he replaced Kimi Raikkonen at last year's Dutch and Italian Grands Prix after the Finn tested positive for COVID.