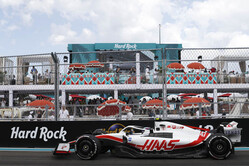 Disappointed to have missed out on his first point-scoring finish of the season, Mick Schumacher harbours no grudge for friend and mentor Sebastian Vettel.

Seemingly destined for his first points of the season, Schumacher was looking good for ninth when he was passed by Vettel. In a subsequent attempt to retake the position in Turn 1 the pair clashed and as a result both left Miami empty handed.

"Obviously, it's a shame that we made contact and both of us out of the race, out of the points," said Vettel in the moments after the race, all the time looking around to see if he couple spot the youngster and apologise.

"I'm disappointed for Mick and myself obviously that the two of us lost a good opportunity to score points today," he continued.

"I tried a move and it's obviously super difficult to see something in the rear view mirrors," said Schumacher. "It's very unfortunate, it was a good race to the end.

"I tried not to go super deep, tried to leave a bit of space... but again, clearly it was too tight. We'll have to have a look at it.

"I'm sure it will be good for me to see what Seb thinks about it," he added. "It's nice that I can learn from him, he's so valuable to me as a friend, so yeah, we'll see.

"Obviously we're all racers," he continued. "We'll just have to move on from here.

"I think the pace was there," he said of the Haas' performance over the course of the afternoon. "It all was looking good but unfortunately the last few laps were a bit chaotic."

Ironically, elsewhere, their teammates, Lance Stroll and Kevin Magnussen were involved in a separate incident which saw the Dane incur damage to his car. Though Stroll finished eleventh, the subsequent time penalty handed to Fernando Alonso promoted the Canadian to tenth.