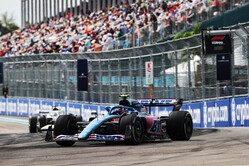 BWT Alpine F1 Team returned to the points with both cars after a thrilling maiden Formula 1 Miami Grand Prix at a raucous Hard Rock Stadium. Esteban Ocon progressed from the back of the grid to eighth place with Fernando Alonso finishing in ninth place to score a combined six points.

Fernando had crossed the line in eighth with Esteban ninth, however, a five-second time penalty for the Spaniard after an incident earlier in the race meant their positions were reversed. Fernando had enough time in hand to claim two points at the end.

Fernando enjoyed a strong start off the line and was able to propel himself into the points places as he held eighth place in the early running. After pitting on lap 15 for Hards, the Spaniard was on course for the top ten before a Turn 1 collision with Pierre Gasly resulted in his time penalty. Fernando was able to extend the gap in the closing stages to cross the line in eighth with the time penalty demoting him one position.

Esteban meanwhile drove a long and patient opening stint on Hards in the hope of a late Safety Car. And with the late collision between Gasly and Lando Norris on lap 40, Esteban was able to benefit from the Safety Car period to pit for fresh tyres without impacting track position. The Frenchman again had to show patience in the closing stages and with Mick Schumacher and Sebastian Vettel colliding late on, Esteban jumped to ninth at the chequered flag and eighth with Fernando's time penalty, rounding off a fantastic effort to progress twelve positions.

Esteban Ocon: "What a race! A big thank you to the team for all the hard work overnight putting back together what was a pretty broken car after that big shunt in practice on Saturday. They are the real stars this weekend. For me, it feels great to come away with points after starting from the back of the grid and I'm definitely leaving happy after such a tough day yesterday. The car and the strategy were great, it was a well-managed race and we're capping off an exhilarating first race weekend in Miami in style. Now we need to keep that momentum as we head back to Europe for the next round."

Fernando Alonso: "I'm happy to be back in the points today. In the race I made some good moves at the start and gained some positions. We were a bit unlucky with the timing of the Safety Car and some others were quite fortunate. We were probably in the fight for seventh or eighth without it. I then made a mistake when I tried to overtake Pierre [Gasly], which was my fault and I apologise. Overall, I think our race pace seemed to be good. It was also very hot and humid, so it was quite challenging physically for us. We'll take the points today as I think we deserved it."

Laurent Rossi, CEO Alpine: "We're satisfied with today's race as it's been a decent recovery effort to save our weekend. We come away from Miami by returning to the points with both cars, which was important after tasting disappointment in Imola. Credit to Esteban for driving a strong race to go from the back of the grid to eighth place. This would have not been possible without his car crew's exceptional work in preparing a new chassis after yesterday's incident. To score points is a just reward for everyone's efforts. Fernando too drove a solid race, especially at the start to move himself into points scoring contention. In the end, with the five second time penalty, it's ninth place, which we'll certainly take after yesterday's qualifying. Miami has proved to be an excellent event both on track and off it, so congratulations to everyone at the team for their hard work this weekend. We must build on our points haul and we now look forward to Barcelona where we return to more familiar grounds. We're hungry to restart a points-scoring streak over the next string of races."