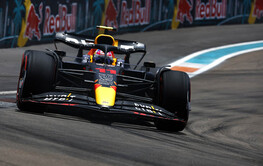 Ahead of today's sole practice session, the air temperature is 33.4 degrees C, while the track temperature is 49.4 degrees. It is bright and sunny, though we are warned that there is a 20% chance of rain.

For Max Verstappen it was a "difficult, messy day", the Dutchman brushing the wall in the morning session and subsequently undergoing a gearbox change, only to encounter a hydraulics issue which meant he failed to post a time in FP2.

Another driver to miss out on the second session was Valtteri Bottas, who spun off in the morning and hit the barriers, the team unable to repair his car in time for the afternoon.

The Finn went off after encountering one of the track's many bumps, indeed for the second night running repairs have been carried out to the track.

Other than bumps, drivers have complained that when you venture off the racing line the surface is like loose gravel and the resultant lack of grip has most suggesting that overtaking is almost impossible or at least a huge gamble.

Add in Lewis Hamilton's description of the Turn 14/15 chicane as being similar to driving around a B&Q car park - like he would know - and you get the feeling that Miami isn't quite the overall success that is being portrayed.

Then there's traffic, which is sure to prove a pain in qualifying, particularly in the final sector.

As if this wasn't enough, the various red flags yesterday meant that drivers have had little to no running on high fuel, which means a lot of unanswered questions going into the race.

Ferrari appears to have the edge, while Mercedes appears much improved.

That said, a driver who is really going through a bad patch at present is Carlos Sainz, who crashed out again in the second session. This comes after the disasters of Melbourne and Imola.

The lights go green and Verstappen leads the way, followed by Perez, Sainz, Vettel, Ocon and Bottas, all three compounds are in use, with Verstappen on mediums and his teammate on hards.

"It's was pretty slow on the straight there, I don't know why," says Ocon. He is told to pit.

Sainz (softs) splits the Bulls with a 34.382 as the Mercedes pair, both on mediums, head out.

Schumacher goes quickest in S1 as Gasly crosses the line at 33.760 to go third. Moments later the Frenchman is demoted when Schumacher posts a 33.106.

Magnussen locks-up and goes off at Turn 17.

"We don't have any telemetry at the moment," Magnussen is told, "but please follow any alarms you see on the dash."

Moments later the session is red-flagged when Ocon goes off and into the barrier at Turn 14. The Alpine has suffered a lot of damage to the left-hand side and it is unlikely that it will be repaired in time for qualifying.

Replay shows the Frenchman losing the car and spinning off, hitting the barrier hard, side-on.

"There's been a red flag in every session so far," points out Pirelli. "This makes it hard to collect consistent long-run data and also suggests that the safety car might have some work to do during tomorrow's race. This has an effect on tyre strategy too."

The session will resume with 33 minutes remaining.

Currently only 12 drivers have posted times, Albon and Zhou haven't even completed an install lap.

Again, Verstappen is first out, but he is quickly overtaken by Latifi. In no time at all, all bar Ocon are on track with all three compounds still in use.

"I don't have any tyre temps on my dash," warns Albon.

"Esteban was taken to the medical centre as a precaution as the impact was over the G limit," reveals Alpine. "He has been cleared by the FIA medical crews and we expect him back soon."

Bottas goes quickest in S1 on the softs, finally crossing the line at 31.885 to go third.

A number of drivers are still running the hards, all those red flags having taken their toll.

Schumacher warns of a plastic bag in his cooling duct which is having an immediate impact on temperatures.

Verstappen makes clear his frustration after being impeded by Stroll. The Dutchman is still on mediums.

The cameras pick up on a number of drivers, including Russell (softs) and Norris (hards) sliding all over the place as they struggle for grip.

"If you're not learning anymore, we're happy to abort," Norris is told. "Yeh," he replies, clearly eager to drop the hards, "box!"

Switching to a fresh set of softs, Leclerc goes quickest in the first two sectors, finally crossing the line at 30.981.

Bottas goes third (31.885) as Russell reports his "tyres are nowhere".

A 31.901 sees Gasly go fourth, as Leclerc looks set to improve. However, the Ferrari driver aborts in the second sector, as Verstappen heads out on the red-banded rubber.

Sainz is currently eighth, ahead of Alonso, Magnussen, and Schumacher.

"The car is bouncing everywhere like a kangaroo," reports Gasly as Alonso improves to fourth (31.401).

Clearly, as the sun lowers in the sky, conditions are improving, as Vettel goes fourth, ahead of Sainz, Alonso, Stroll and Tsunoda.

A super-fast final sector sees Perez go quickest with a 30.304.

Wow! A mistake after hitting the kerb at Turn 15 almost sees Verstappen go nose first into the barriers, which, appropriately, are sporting the Red Bull logo. How, the Dutchman was able to stop the car in time nobody knows.

Quickest in S1, Leclerc ease off in S2 as he encounters traffic. Nonetheless, he improves to second with a 30.498.

While Red Bull and Ferrari remains a closely matched as ever, overnight Mercedes appears to have taken a huge step... unfortunately it is backwards.

Lots of work to be done over the next 120 minutes.