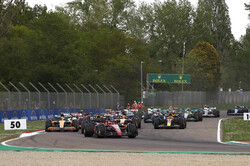 Branding the Imola Sprint a "great success", F1 MD, Ross Brawn admits that despite failing to reach an agreement this season, he is targeting six Sprints in 2023.

Last year, the Briton claimed that at least a third of the races on the 2022 calendar would feature Sprints, however a failure to reach an agreement over the amount of compensation to be paid in the event of accidents - with the bigger teams calling for the raising of the budget cap - saw the number restricted to just three.

However, speaking to the media following the Imola Sprint, Brawn admitted that the target for next year is at least six.

"On Tuesday we want to discuss increasing it to six, so we'd like to have six races next year," said Brawn, in reference to a meeting with the team bosses this week.

"The thing you should always remember about the sprint is it gives you a great Friday as well," he insisted, "we have qualifying on Friday, three days of action for the fans, so we can't ignore that."

There has been talk of the Sprint being made a standalone event, increasing the length of the 'race' and reducing its 'impact' on the world championship, though it remains to be seen how the teams would view this.

"What I'd like to do is at least get six races settled," he admitted. "After these three races, we can see if there are some format developments we want to do, but I'd like to just move on to six races, get that bedded in and settled. If there's any format changes that we feel are worthwhile, then we can consider those.

"The six races needs to pass on a simple majority," he said of the process to have the move accepted for next season. "Any format changes in the future, would have to pass on a super majority, so eight teams will have to agree.

"I think the important thing is to get the simple thing done first and then there may be scope in the future for evolving even further."

The Briton pointed to the battle between Max Verstappen and Charles Leclerc as proof that drivers now see the Sprint as a valuable opportunity.

"We all know, racing drivers are racing drivers. So any thoughts they were going to take it easy for the race... I don't think was the case. I think we were fortunate, and the tyres were perfect for the sprint race, because they started to degrade.

"And, of course, in a normal race, you would have had the driver coming into the pits, changing the tyres. It all comes down to strategy. But we had one shot at the race and the drivers had to make the tyres last.

"We've demonstrated the cars can follow. You may say it was DRS, but you can't use the DRS unless you get on the back of the car. So I think overall, it was a great success."

This year's remaining Sprints are scheduled for the Red Bull Ring and Interlagos.