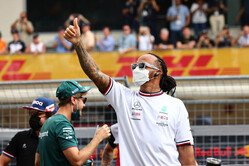 Speaking after the Australian Grand Prix, Lewis Hamilton's response to the impending clampdown on jewellery and body piercings was clearly a little less jocular than on Thursday.

When race director Niels Wittich brought attention to the long-standing rule concerning the wearing of jewellery on Thursday, there is little doubt that the first name that came to mind for most fans of the sport was that of seven-time world champion, Lewis Hamilton.

"The wearing of jewellery in the form of body piercing or metal neck chains is prohibited during the competition," declares Appendix L, Chapter III, 5 of the FIA's International Sporting Code, "and may therefore be checked before the start."

The media was quick to seize on the directive and at Friday's press conference Hamilton made light of the matter.

"Well, I've got certain piercings that I really just can't take out that not many people know of," said the Mercedes driver.

In Wittich's second set of event notes issued on Saturday, along with news of the removal of the fourth DRS zone and a clamp down on safety car restart protocols, drivers were once again reminded that: "The wearing of jewellery in the form of body piercing or metal neck chains is prohibited during the competition and my therefore be checked before the start."

Speaking after the Grand Prix, in which he finished a surprise fourth, Hamilton's approach was a little less jocular than on Thursday.

Asked about the jewellery ban, and in particular his ear piercings and nose stud, the Briton replied: "I don't have any plans on removing them.

"I feel there are personal things," he continued. "You should be able to be who you are.

"There is stuff that I can't move," he added. "I literally can't even take these out... these ones on my right ear, they are literally welded in so I have to get them chopped off or something like that. So they will be staying."

It's understood that drivers will be given a period of grace before the FIA decides how to proceed, with some suggesting refusal to adhere to the rule could result in a fine or loss of points.

Along with the announcement that the rules on regulation underwear are to be enforced also, it is clear that the FIA means business, how the drivers will react remains to be seen.