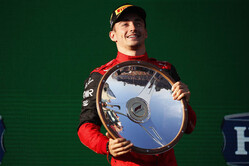 Ferrari driver Charles Leclerc converted his pole position into a win, using the one-stop strategy that was predicted as being fastest. He started the race on P Zero Yellow medium tyres and then swapped to the P Zero White hard on lap 22: completing a first stint that was four laps longer than that of Red Bull's Max Verstappen, who started behind him on the grid.

One lap after Leclerc pitted, there was another safety car: this enabled the majority of the field to complete their stops with comparatively little time loss. All but six of the drivers started the race on the medium tyre, with the highest-placed of them being Williams driver Alex Albon. He finished 10th and scored a point, having started from last on the grid with the hard tyre and made his pit stop to P Zero Red soft on the penultimate lap.

Another unusual strategy was seen from Aston Martin's Lance Stroll: he made three stops in total and re-used the hard tyres he had started the race on for his final stint. That set had only completed three laps before the first safety car, under which Stroll pitted for the medium before moving to the hard just one lap later. By doing this he put himself in a position to run to the end, but he swapped to his scrubbed set of starting tyres when the second safety car presented the opportunity for a ‘free' pit stop.

Today was hotter and less windy than previous days in Melbourne, with the race getting underway in 27 degrees centigrade ambient and 38 degrees of track temperature.

Mario Isola: "The tyres performed in line with the expectations we had established from Friday's free practice sessions, despite the much higher temperatures on race day and expected track evolution. Nearly all the drivers made just one pit stop, with many of them taking advantage of safety cars to minimise the time loss. The different characteristics of the medium and hard tyres, with deliberately higher degradation on the medium, also presented the drivers with a wide pit stop window. This allowed them to maximise strategic opportunities today. The modified track layout here in Melbourne helped to underline how the new car and tyre package for 2022 permits drivers to attack and overtake, with a high number of passing manoeuvres. We also saw some ingenious pit strategies, such as two consecutive pit stops from Lance Stroll to cycle through the medium tyre, and a very long hard stint from Alex Albon that enabled him to get from last on the grid into the points."