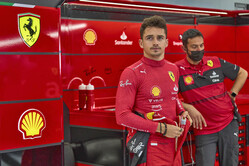 No disrespect to either Lando Norris or McLaren, but even though the youngster topped the timesheets earlier, it is highly unlikely that he or his teammate will be throwing as spanner in the works over the next hour.

As was the case in Bahrain and Saudi Arabia, currently the F1 title fight appears to be all about Ferrari and Red Bull, with the emphasis on the former.

Of course, there is always the opportunity for someone to throw up a surprise, but as far as the title goes it is currently a two-horse race.

Opting for total fairness, Ferrari has decided against giving Leclerc its latest diffuser this afternoon, the Italian team, which only has one of the new versions ready, feeling it would be unfair to supply just one driver.

That aside, the Monegasque appears to have the edge over his Spanish teammate.

At Red Bull, Perez continues to impress the Mexican finally upping his game on a consistent, culminating in that pole at Jeddah.

We didn't get to see Verstappen's true pace earlier due to traffic, but expect him to be battling for pole later this afternoon.

Fernando Alonso was impressive earlier, finishing fourth, and though we don't expect the Spaniard to challenge for pole, he should never be written off.

Mercedes struggles continue and as the German team seeks that 'silver bullet', damage limitation remains the name of the game.

Yesterday, Norris said McLaren has taken a step forward, and what better way to prove it than by local hero getting into Q3 for the first time this season.

While the Haas pair have been surprisingly off the pace thus far, their Alfa Romeo counterparts have looked strong, particularly veteran Bottas. AlphaTauri should also be looking good for at least one car in Q3.

As ever traffic is going to be an issue in all three phases of the session, and this, combines with the number of offs we're witnessing could result in a few shocks.

With Vettel and Stroll both crashing this morning, Aston Martin will have its work cut out just getting them into Q1, anything further than that a positive bonus.

The lights go green and Magnussen leads the way, followed by Schumacher, Albon, Tsunoda, Gasly and the Ferraris.

Meanwhile, in the Aston Martin garage work on both cars continues at a frantic pace.

Moments later however, Leclerc gets serious with a 19.391.

Latifi goes off at Turn 11 and is lucky not to hit the barriers.

Ricciardo goers sixth (19.798), ahead of Gasly, Albon, Schumacher and Magnussen.

Quickest in S2, Alonso crosses the line at 19.653 to go fifth. However, the Spaniard is subsequently demoted when Bottas posts a 19.641.

All eyes on the Mercedes pair, as Verstappen improves to second (18.925).

Quickest in the first and final sectors, Verstappen ups the ante with an 18.580.

With 4:20 remaining, Stroll heads down the pitlane. Still no sign of Vettel.

Hamilton improves to eighth with a 19.401 as Schumacher goes fourteenth and Magnussen remains 16th.

Oh dear, Latifi has crashed at Turn 6. The session is red flagged.

Replay shows the Canadian colliding with countryman Stroll. The Williams driver had been passed by the Aston Martin when, having realised Stroll wasn't on a flyer, Latifi decided to retake retaking the position just as the Aston Martin driver move across the track and into him.

Both drivers question what the other was doing, using varying amounts of expletives.

Both cars are badly damaged, particularly the Williams.

With the clock stopped at 2:01 there is still a chance that Vettel could get out.

As it stands, both Astons are in the drop zone, while Albon, Magnussen and Latifi also look set not to progress any further. Schumacher, Zhou, Gasly and Tsunoda are hovering.

Frantic work in Vettel's garage where the German prepares to climb into his car.

Ricciardo heads the queue at the end of the pitlane, the McLaren driver cheered on by the fans.

"Elbows out," Albon is told as Vettel heads down the pitlane... sterling work by the Aston Martin crew.

As the head out, behind Ricciardo Albon and Schumacher are battling for track position. The German wins out and subsequently passes Ricciardo.

Vettel crosses the line in time to begin a flyer, unlike the Mercedes pair.

Loads of green sectors but no purples.

Magnussen fails to improve as does Albon, who is told to stop the car while out on track.

In other words, much ado about nothing.

Verstappen leads the way as Q2 gets underway. The Dutchman is followed by Hamilton, Russell, Schumacher, Perez, Tsunoda and the Ferrari pair.

Verstappen crosses the line at 18.611, while Hamilton once again is going for a double warm-up.

Russell had gone off at Turn 11, after dipping on to the grass, thereby bringing out the yellows, which caused problems for a few drivers.

Perez could be in trouble for allegedly failing to slow under the yellows.

"I had trouble with a Red Bull," complains Hamilton.

"Was he on a lap," asks Verstappen. Indeed he was, the Dutchman is told.

The Ferrari pair head out on fresh softs.

The stewards will be investigating Perez after the session.

Tsunoda runs wide in Turn 11. The Japanese also has a time deleted for exceeding the track limits.

Ahead of Q3, a number of drivers are complaining about the low sun in their eyes.

Verstappen leads the way as the final phase of the session gets underway. As more drivers head out, Alonso is the only no-show.

Verstappen is setting a blistering pace, the world champion crossing the line at 18.399 despite going deep in the penultimate corner.

However, Perez responds with an 18.398 to take the top spot.

Ocon goes third while Hamilton yet again goes for a double warm-up.

Hamilton goes sixth with a 19.294, however, moments later the session is red flagged after Alonso goes off at Turn 11.

The Spaniard had just gone quickest into S2 before losing it. "I lost hydraulics," he reports, "so I couldn't shift gear."

Sainz and Russell were both on flyers at the time of Alonso's crash, the Spaniard having looked set to claim provisional pole.

The lights go green and Hamilton leads teammate Russell out on track.

"Lewis is going very slow," warns Russell as the pair are joined by Perez.

Once again, the Mercedes pair are going for a double warm-up.

As Perez begins his flyer, he is joined by Leclerc.

Like the Mercedes, Sainz is going for a double flyer.

As Leclerc goes quickest in S1, Verstappen posts an 18.154 to take provisional pole.

Norris goes fourth with an 18.703 as Leclerc takes pole having gone quickest in the first and final sectors.

Judging by the expletives, teammate Sainz is not happy to only manage ninth.

Gasly qualifies eleventh, ahead of Bottas, Tsunoda, Zhou, Schumacher, Albon, Magnussen, Vettel, Latifi and Stroll, though the Thai driver has a three-place grid penalty from Jeddah.

"It's hard to get the momentum going with all the red flags," he adds, "I regret the decision we made with the tyres going into Q3."

"We'll try to analyse it. This weekend has been all over the place. Happy to be second, but as a team we want more."

"It felt good!" grins Leclerc. "Even more because it's a track where I've always struggled in the past.

"In Q3 I managed to put everything together so it feels great, very happy. The car is nice to drive, everything is possible tomorrow. We need a good start."